The day I left my kids in the car

The day I left my kids in the car

I should have known by looking at my to-do list.

In one morning. With 2 active toddler boys.

But I needed to get them done. We’d just returned from a 2-week trip to see family over Thanksgiving, so a lot of errands had stacked up. Plus, it was Friday, and I wanted them done before the weekend.

We breezed right through the deposit at the bank and getting gas at Sam’s Club, probably because, for those errands, I could keep both boys in their car seats.

But by 5 minutes into the wait for the Geek Squad at Best Buy, I could tell this wasn’t going to be a pleasant morning.

The boys just wanted to, well… just be toddlers. They wanted to run and climb. And touch buttons and turn up speakers. Unfortunately, all of these are possible from the exhaustingly-long line at Best Buy a few days after Black Friday.

By the time I got to the front of the line, the Geek informed me that our external hard drive, which holds our last 5 years of family pictures, could not be repaired.

I was shell-shocked. Numb. All of those pictures.

I barely noticed the old couple scowling at us, as I peeled my kids off the DVD rack and walked them out to the car.

As I pulled into the parking lot at the mall, I realized that I’d committed a cardinal mistake for a mom of 2 toddlers: I only had my single stroller with me. This meant the 3-year-old would have to walk. Great.

After narrowly avoiding a potty accident by having him pee into an empty sippy cup in our Suburban, we walked in through Macy’s and made a quick stop at Victoria’s Secret. A few minutes later, we arrived at Bath & Body Works, where I decided I had to smell every single soap before deciding which one I would buy (blame the pregnancy nose), and didn’t notice the toddler dispensing sweet pea foaming soap right onto the tile floor. I got him a paper towel and had him wipe it up and throw it away.

This is good. He’s cleaning it up. We’re doing fine.

As we were waiting in line, he got bored and started grabbing items out of every single box in the display. After asking him several times to put things back, and basically repeating the exact same message over and over, I was beginning to feel like I looked like an idiot to everyone else in the store.

So, I started threatening. Sweetheart,if you want to play at the playground after this, I need you to behave right now. Please listen, if you want that Lunchable in the car. Eventually, I realized words weren’t getting through, so I grabbed his arm to bring him back to the stroller. He fought me, hit me and then tried to jump, and in the process, slipped and fell, hitting his head on the tile floor.

He was physically fine, but it was typical toddler dramatics. I tried to comfort him while also explaining that it was wrong of him to hit me, and since he wasn’t able to listen to my requests to stop touching things, I would have to put him in the stroller.

I didn’t make eye contact as I threw my soaps and coupons onto the counter in front of the cashier. She didn’t say a word as she took my card and handed me a bag.

Everyone wanted me out of there.

Five months pregnant, I hoisted the 19-month-old onto my hip and tried to maneuver our umbrella stroller, holding the still-shrieking 3-year-old, out of the store.

I made my way to a couch in the center walkway of the mall because I knew we needed to regroup. Plus, there was no way I could keep carrying the baby and pushing the stroller with one hand. I didn’t make eye contact with the old couple at the couch across from us.

Tears streaming down his face, the toddler continued shrieking as I unbuckled him from the stroller and had him sit on the ground while I gathered myself. I put the baby back in the stroller, took a deep breath and then asked the toddler to come over to me. I told him again why he was on timeout, and asked again if he thought he could follow directions while we’re in the mall so that we can get to the playground, and that I loved him. We hugged. The old couple was still staring.

At the mall playground, I was just over it. I pretended I didn’t see my 3-year-old jumping off the slide. I was done.

As I asked the boys to get their shoes back on, the older one sprinted out of the playground toward a motorized toy helicopter that takes quarters. The same one I’d asked him not to get on about 7 times. That’s it. We’re going to the car.

I pushed the stroller with our 19-month-old and power-walked through Macy’s as an epic cryfest ensued behind me. A trail of shrieks and cries was the only evidence my toddler was following.

On the way to the produce market, I zoned out. The kids asked for their waters and for me to put their windows down. I’m usually very responsive to them in the car, but today, I was completely silent. They could wait.

I realized I’d expected too much of my kids today, and now, I was suffering the consequences.

At this point, I really just wanted to go home, but I had to stop at the produce market. It was the one errand I really wanted to get done that day, especially since it would be a week until I was back on this side of town. It’s okay. I’ll bet I can just run in and leave the kids in the car. If I park right in front, I’ll have a clear view of them through the windows. It’ll be a quick stop.

As I put the car in park, I gave both boys a Lunchable, rolled their windows all the way down and locked the car. It was 72 degrees.

In between grabbing lettuce and red bell peppers, I’d dart to the front doorway of the store to check on the car. Everything looked fine. They looked happy and content. And, I’m getting this errand done at least twice as fast as I could have with them. I rock. I totally got this.

As I got to the front cashier to check out, my heart sank as I saw an adult figure peering into the 3-year-old’s side of the car. I immediately bolted outside, thinking it was a stranger from the sketchy neighborhood nearby.

It was a uniformed police officer.

Oh great. Just what I need.

Furious, I paid for the rest of my produce and wheeled my cart over to her in a huff.

Now I’m going to get scolded by a cop, after the day I’ve had. Unbelievable.

“Are you going to ticket me or something?” I asked with disdain in my voice.

“Maybe. Can I see your license?”

As I opened the passenger door, grabbed my wallet and gave her my ID, I turned my angst toward furiously loading bags of produce into the passenger seat. I wanted nothing to do with the cop standing in front of me.

“So what happened?” she asked.

There was so much to say, but I didn’t want to say it.

Without looking up, I kept loading my groceries, the silence punctuated only by my occasional grunt of disgust.

The last thing I need is to be reprimanded after the day I’ve had.

I screwed my lips together tightly, realizing that at my first word, the frustrations, embarrassments and defeat of my day would come pouring out in a flood of hot tears. That my buried thoughts of I’m-not-good-enough and why-are-my-kids-acting-this-way would come flooding to the surface.

And I didn’t want her to see that.

Of course she doesn’t. There’s no way she’ll understand my day.

I started talking and stopped myself.

Then I looked at her. She had rosy cheeks and the earnest eyes of someone who was trying to help. She was authoritative but not condescending.

I realized she really wanted to hear my answer.

As I opened my mouth, the sobs started uncontrollably, and the next 7 minutes were a tangled mess of ‘I’ve had the worst day,’ ‘the boys were everywhere,’ ‘I was just running in here,’ ‘I’ve never done this before’ and ‘it’s not even hot outside.’

But I could have summed it up in one sentence.

I’M DOING THE BEST I CAN.

When my mouth paused, I looked down as my body heaved with tears.

I was a failure.

I was an unfit mother. Who was talking to a cop in a parking lot.

That same mom who I had reported on in my days as a TV news reporter.

The mom who I’d labeled as lazy, uneducated, stupid.

Who needed a cop to tell her how to take care of her kids.

Those hot tears continued to pour down my face as I fully felt the shame of my day. First from my children, then from strangers, and now from a uniformed police officer.

I had nothing left.

The officer explained that this isn’t a great neighborhood, and someone could have easily come up to the car and taken the children.

“That,” she explained, “would have definitely made your bad day even worse.”

She handed me my ID and let me go with a warning. No doubt she could tell from my cryfest that I’d definitely learned my lesson. (As it turns out, under Florida law, it’s legal to leave your kids in the car for less than 15 minutes, if they are safe and the car isn’t running.)

I got into the driver’s seat and drove away, my sniffles erupting into full-blown sobs every few minutes on the ride home.

It’s been a few days since, and to be honest with you, I’m still traumatized by this difficult day.

First, I felt shamed by the public for my parenting. Then, a cop.

I know that what I did was wrong.

But sometimes, I really feel that I can’t win. 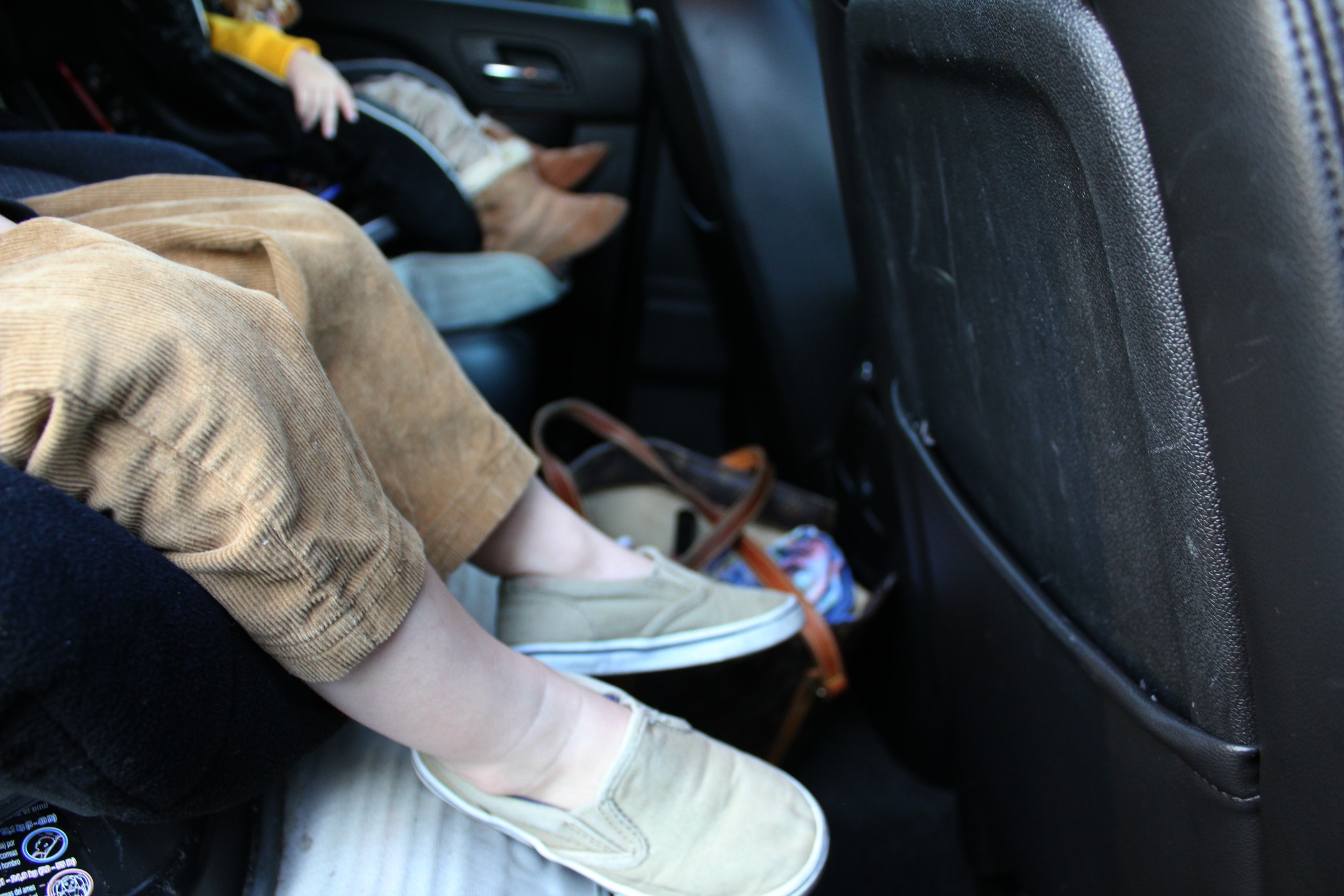 Have you ever left your kids in the car to run a quick errand (or made another judgement call that seemed necessary at the time but was questionable, looking back)? Share in the comments section below. And please, constructive comments only. I’ve heard enough criticism of my parenting in the last few days.