Scroll to the bottom of this post to watch a Facebook Live about the power in not giving your kids everything they want, even if it’s easy for you to do.

My words hung in the air, as I stood next to my friend on a random Tuesday at the park.

She’d been catching me up on her son’s potty-training drama and the latest changes to preschool carline.

And as her story progressed, both of our eyes had wandered to a stressed-out mom who was chasing her 5-year-old through the playground.

She was going up the stairs.

She was hovering under the slide.

She was running through the jungle gym.

At every move, she was trailing behind her son, so that he didn’t make a wrong move and fall down. (Again, this was a 5-year-old who could talk and walk and run.)

Of course, we all do things differently, and I’ve no doubt that this mom was doing exactly what she needed to do.

But, I happen to believe there’s something to be said for not always catching our kids before they fall.

Because if we don’t let our kids fall down, they’ll never learn to get back up.

Whether it’s on the playground or in life.

You see, in my experience, when we feel failure (like, really feel it), we learn to figure it out.

Did you hear that?

We figure it out.

In fact, more often than not, we figure out a better way.

And, in the process, we usually experience humility.

We grow. We learn. We become more compassionate.

But without that initial failure, this beautiful chain reaction doesn’t even have a chance to begin.

In fact, in my last 5 years as a parent, I’ve found that letting my kids experience failure is the very best parenting tool I have.

And so, I let my kids fall down.

Within reason, I let my kids get hurt.

And sometimes (and this may blow your mind), I even let my kids feel left out.

The other day, I was watching 6 kids at my house (as part of my babysitting co-op), and my oldest son started acting rude and aggressively with the other kids.

Of course, I tried to stop it.

I verbally corrected him. I sent him to timeout. I separated him from the group. I even spanked him.

Until, eventually, one of the other kids said, “We don’t want to play with you anymore.”

And the rest agreed.

My son kept trying to rejoin the group. He walked to the other side of the circle, to see if another kid would let him in. He said please. He went to his room to find a new toy to offer everyone.

But it was too late.

“No, we don’t want to play with you because you were being mean.”

As I watched it all play out, my first instinct was to ask the other kids to include him.

But then, I realized that if I did that, I’d be sparing my son of the greatest learning experience there is: that of feeling the natural consequences of his actions.

As he ran to me, crying, I hugged him. And I knew exactly what to say.

“If you are rude and aggressive with others, they aren’t going to want to play with you. Let’s try to be kind and gentle and see if they include you again,” I spoke softly into his ear.

It was so easy.

As it turned out, my timeouts and verbal corrections couldn’t hold a candle to the sting of exclusion my son experienced as a natural consequence of his being rude to the others.

The lesson had been learned.

And I didn’t have to do a thing but let it play out.

I distinctly remember the day in high school that my mom forgot to pick me up from school. I’m the oldest of 4 children, and no doubt she’d had a long day with the other kids and it’d slipped her mind. After waiting at school for an hour, I walked the 3 miles home, and when I got to my house, I slammed our front door with rage, stormed into the kitchen and screamed in my mom’s face that she’d forgotten me. Later that night, my dad told me I no longer had a ride to school the next day. I figured my mom would still take me, but when the morning came, she refused. It was midterms, and as a straight-A student ready to start college applications, being late wasn’t an option. In my mind, missing these tests would’ve been the end of my academic career. I pleaded with my mom. I told her she was ruining my future and everything I’d worked for. But she held her ground, and that day, I walked to school. And I missed my tests.

My mom didn’t rescue me from failure. She let me suffer through it.

She let me figure it out.

She let me learn.

And now, as a mom myself, I’ve realized that I want my kids to experience failure because failure is how we grow, learn and think outside of ourselves. It’s how we self-educate to learn what’s right and respectable, and what’s not. It’s how we become responsible and compassionate.

Falling down makes us better. Because we learn how to get up.

Rescuing my kids from failure isn’t my job.

My job is to love my kids through life’s disappointments, and give them the tools in life to figure things out for themselves.

And so, the next time you want to save your child from skinned knees or a bruised ego or missing the bus, remember that you might be cheating them out of the greatest education they could ever have: the power of knowing that there are natural consequences for their actions, and that they are ultimately responsible for the choices they make.

Raise up your child in the way he should go. And when he fails along the way, stay on the sidelines and enjoy your front-row seat to watching him grow, learn and start to think outside of himself. 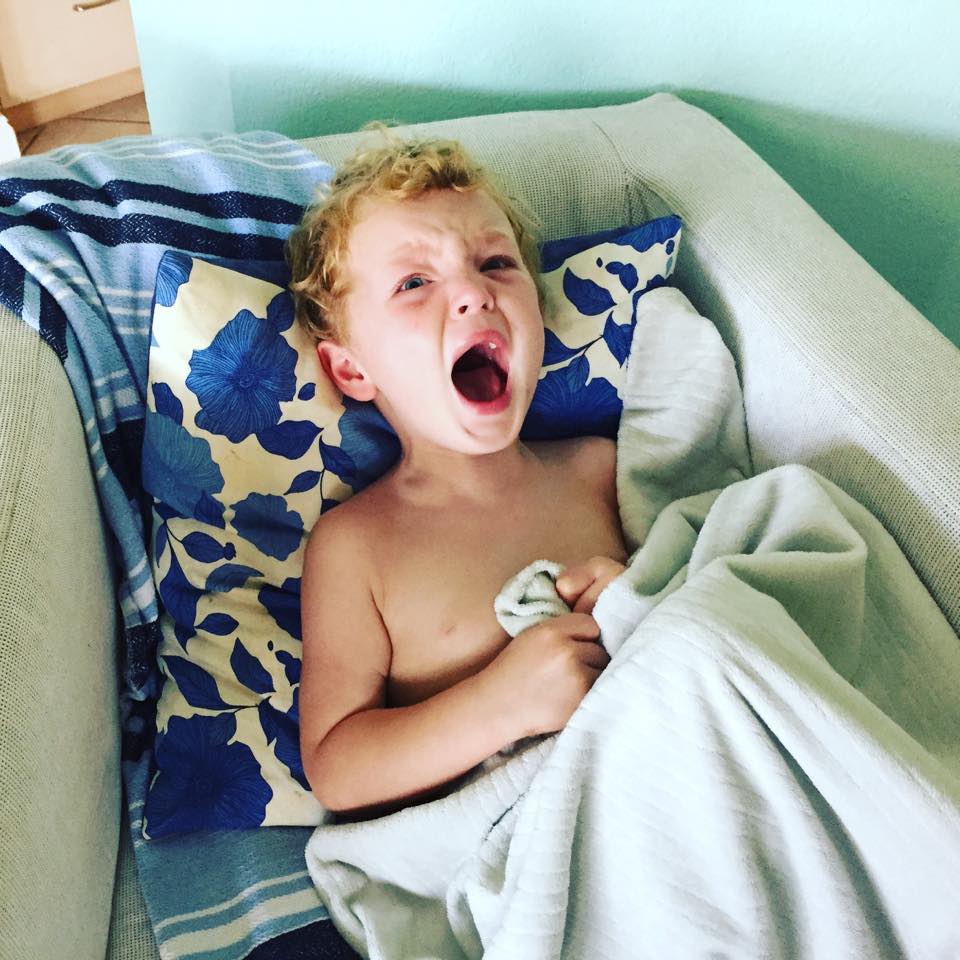 (In case you’re wondering, this is a picture of our oldest, after we took away his Batman costume as punishment for throwing a toy at his dad. #ohtherage)

Have allowed your kids to experience natural consequences? How’d it turn out? Share them in the comments section below.