The celeb who helped a young mom on a flight

The celeb who helped a young mom on a flight

When my friend Taryn found herself on the same flight as actor Jay Mohr, her experience was anything but what she expected. Especially from a celebrity.

It was a Saturday afternoon in January at O’Hare Airport in Chicago. Taryn was on a business trip, and about to board a plane to Syracuse, New York. She’d decided to bring her toddler son, and was on the tarmac, struggling to hold him as she tried to collapse her stroller.

She looked up, saw a blonde guy within arm’s reach and blurted out, “Hey! You look nice. You want to hold a baby?” (Taryn has always had the gift of the gab!)

Surprised, the man looked up and seemed a little confused, but smiled.

He held the baby as she finished packing up her stroller. Then, they started talking.

And in a few seconds, Taryn realized she knew this face.

It was actor Jay Mohr. He’s appeared in films like Jerry Maguire, Picture Perfect, Pay It Forward, and her favorite movie of all time, Playing By Heart.

“We started chatting, and he told me that he had a 3-year-old son, and that he’d love to have more kids with his wife,” Taryn recalled. (Mohr is married to actress Nikki Cox, who’s appeared in TV shows like Las Vegas and Unhappily Ever After.)

Seeing him up close, Taryn said she couldn’t believe what beautiful skin he had. He was taller than she’d expected, too.

But more than that, she saw kindness in his eyes. He was relatable and eager to help, on a day when she had a toddler, carry-ons and a stroller to juggle, not to mention the thought of a long flight with her 21-month-old son.

As they boarded the plane, Mohr turned to the little boy and said, “Hey handsome! What’s your name?”

Taryn told him his name is Connor. “And you’re Jay, right?” she asked with a smile.

She told him that Playing By Heart was her favorite movie. He smiled, and said no one ever mentions that movie to him.

Once they boarded the plane, Taryn realized that, oddly enough, Mohr’s first-class seat was catty-corner from her seat, in coach.

HE PUT HIS STUFF DOWN AND CAME BACK TO SIT WITH HER IN COACH.

“He showed me a hilarious video of his 3-year-old impersonating Tracy Morgan, asked me where I lived, and we talked more about his career and just chatted for a good 10 minutes,” Taryn recalled.

Finally, she worked up the guts to ask if he’d take a picture with Connor.

“He was completely cool about it,” she said. “I really couldn’t believe his kindness and candor.” 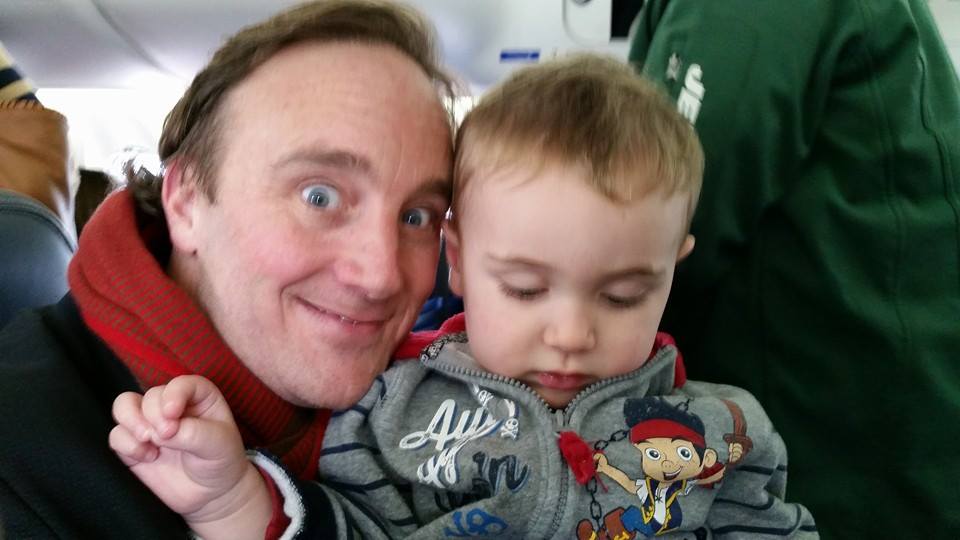 Before the plane took off, Mohr returned to his own seat. And then, mid-flight, he turned around and asked Taryn if she’d like free tickets to his comedy show that night.

Since she already had plans with her in-laws, she politely declined.

“Did you just say ‘no’ to free tickets?” he asked playfully. “You just burned me!”

As they deplaned in Syracuse, Mohr turned around, and yelled “Bye, Taryn and Connor!” as he walked into the airport terminal.

“It was such a cool experience!” Taryn recalled.

“I couldn’t believe what a kind, down-to-earth guy he was. He seemed very much like a family man. He held Connor and took a genuine interest in helping me out before the flight.

“Most strangers wouldn’t do that, let alone a celebrity.”

And so, Jay Mohr, I salute you.

And so does every mother who has ever traveled with young children.

Not only are you good-looking and talented, but you are kind-hearted and compassionate.

Even to the stressed-out mom on a long flight with a toddler.

Want to share some Jay Mohr love? Retweet my tweet to him and thank him for helping a stressed-out mama on a flight! I just love that there ARE still good stories in this world to tell. Strangers DO help strangers. Even celebrities.