As a stay-at-home mom, the constant cycle of feeding, cleaning, changing and bathing can make the days start to feel the same. But a few months back, I got a serious change of scenery: I was flown to New York City to shoot an online commercial. (Scroll to the bottom of this post to watch the video and try not to laugh at my acting skills, or lack thereof!)

My palms were sweating. As I read the email, I felt light-headed.

What? This is a dream.

A media company wanted my husband and I to fly to New York City to shoot an online commercial for a major food distributor. All I had to do was email them my favorite cozy soup recipe, using a few of their products, and then, 2 days later, we’d be there to shoot a 4-minute online commercial!

Of course, with no family nearby, figuring out a way to leave our 3 kids in Tampa so we could spend 36 hours in New York City, child-free, felt a bit like moving Heaven and Earth. Luckily, a friend offered to watch all 3 of our boys, in addition to the 2 boys of her own (yay for my mama village!), and my husband was able to take a day off work.

As I sat in the window seat of that plane on Sunday morning, I was elated. It was like, I Am Queen of the World. I felt so darn great. I was just sitting in that airplane seat all alone. I wasn’t wiping noses or forcing screen time. I wasn’t shushing kids or worrying about where the pacis were. I was traveling. For business. And not even as a TV news reporter representing my station (which would still be cool!), but as me. Just representing myself. It felt so freaking cool!

We got into the city in the afternoon, and spent the evening walking around. No nap times to worry about. No diaper changes. No potty stops or cutting up food. Just my husband and I, strolling around New York City, walking through those city blocks in circles, getting lost and not even caring.

I felt young again. And, it was crazy. Because I remembered how fun I really am.

When I’m not being a mom.

Not Mom, trying to get kids to behave and eat and clean up.

Not Wife, with a long list of chores to do before bedtime.

On Monday morning, we Ubered to the studio address we were given, held our breath, and pressed “3” in the elevator. As the doors rolled open, directly into an expansive studio space, I thought it must have been a mistake.

There were about 20 people standing there, looking at us.

Are they waiting for us? There’s no way. This must be a mistake.

There’s no way this is for us.

So, we got prepped to shoot our online commercial.

We got our makeup done. 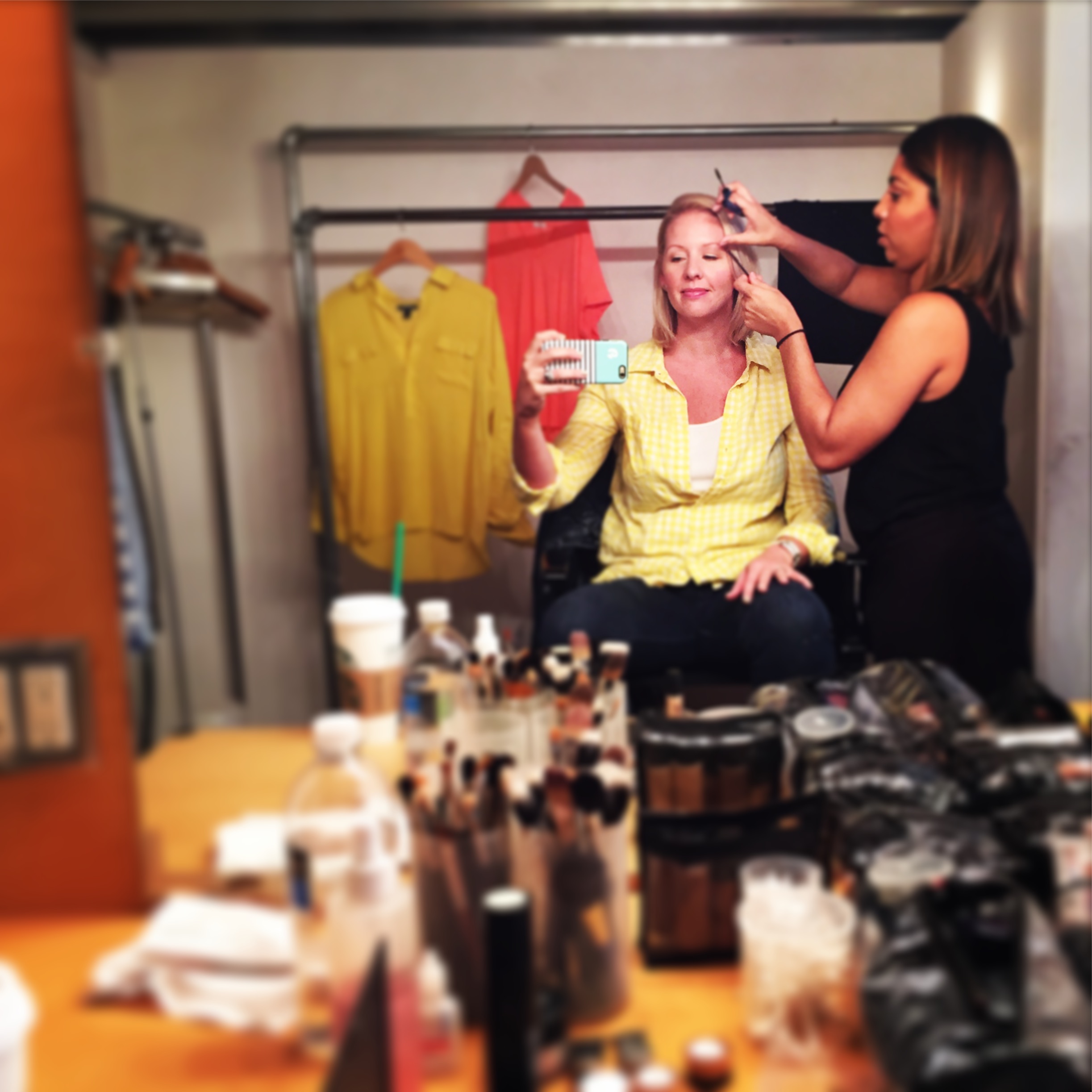 We met with the creative director, who helped us conceptualize the shoot. (We didn’t have a script, so the idea was we’d freestyle the recipe, as if we were making it together at home. Which, by the way, sounds sooooooo much easier than it really is.) 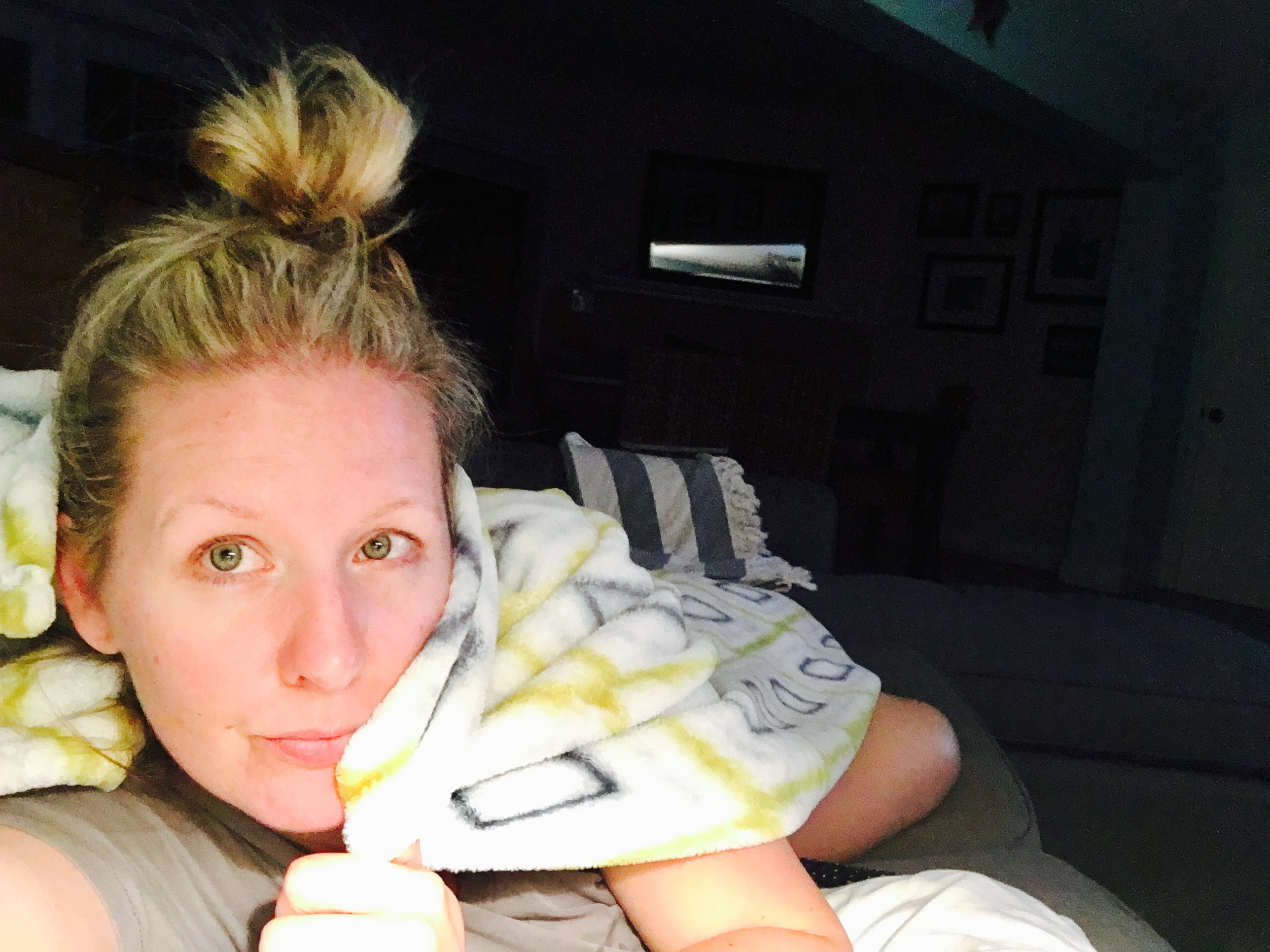 We had another director who helped pick what we’d wear. (LOL.)

And then someone steamed it. (*mind blown*)

We had not 1, but 2… wait for it… FOOD STYLISTS. (Yes, it’s true.) Who literally made the recipe for us, and had each “step” prepped and ready for me to show.

I kid you not, at one point, there was a moment when someone didn’t like how an avocado was cut. So, the director stopped filming, while one of the food fashionistas grabbed a new avocado to try again to cut it perfectly. (Again, *mind blown.*) 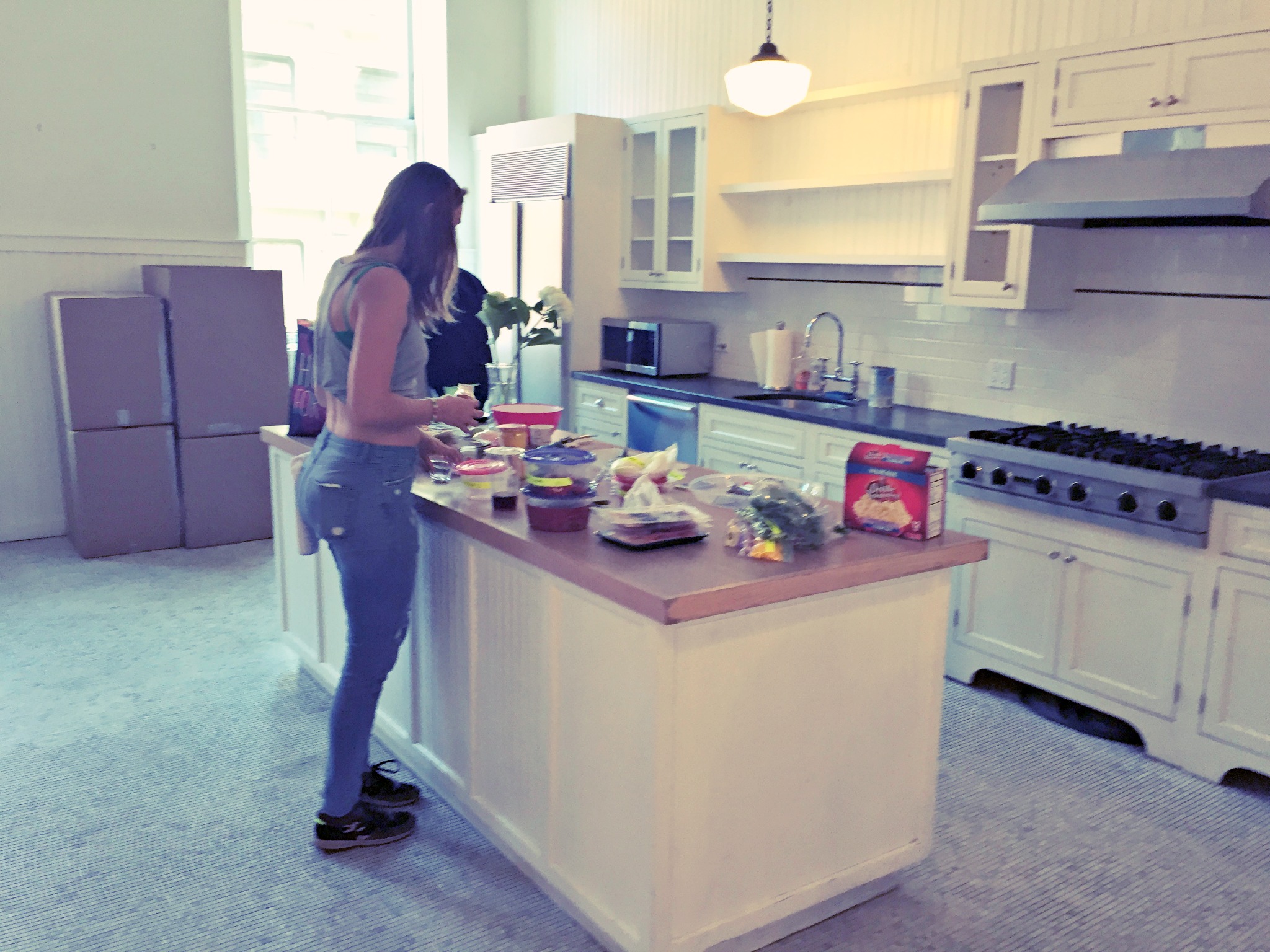 We had an audio person, and he had a 3-person crew. He taped down the zipper on my hoodie, so the microphones wouldn’t pick it up. (You know, I just hate when I hear that zipper on my hoodie make a noise. Kidding, ’cause you know I can’t hear anything under a million decibels when I have my 3 children with me. #dontcallme) 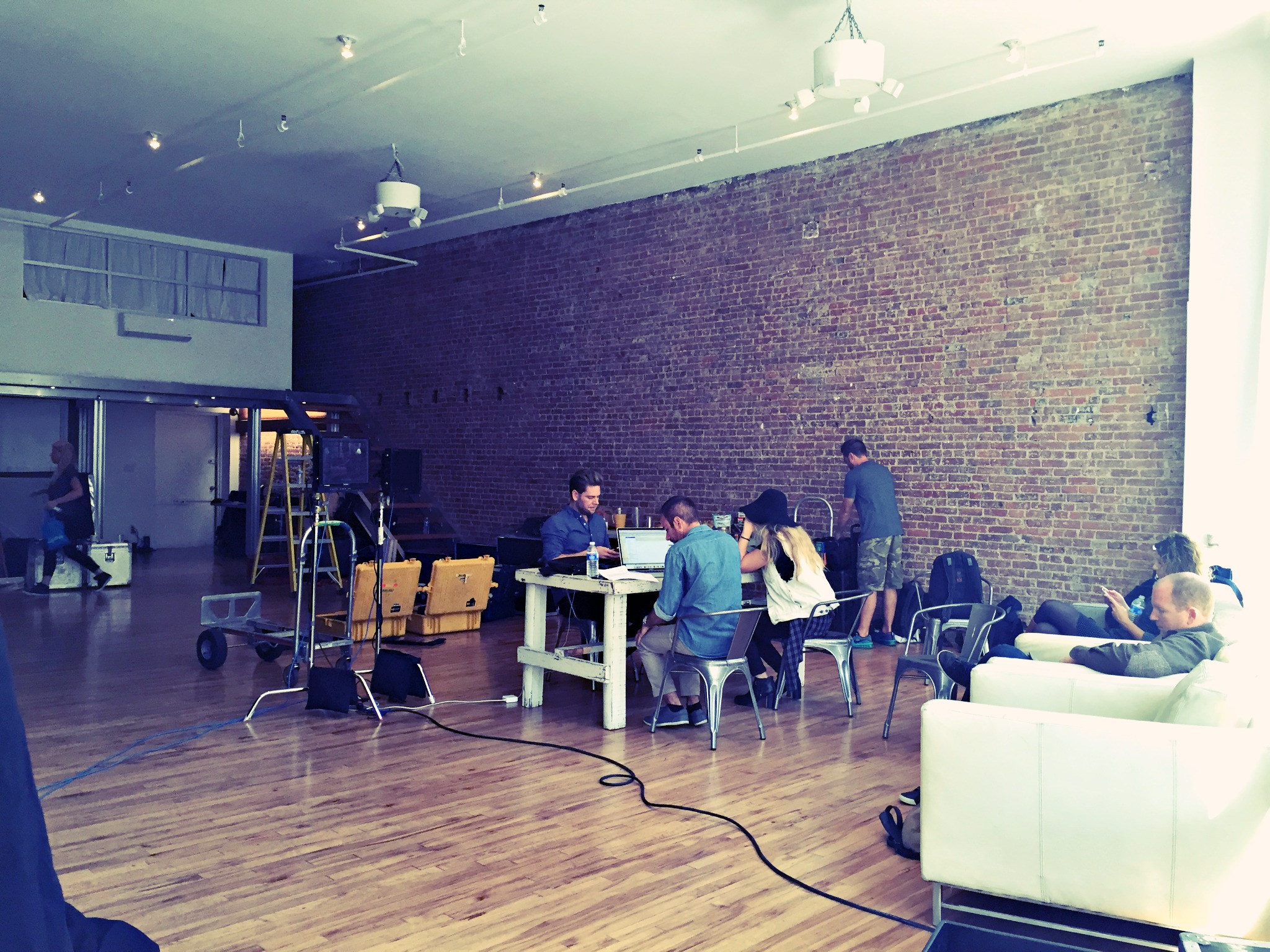 It was a very, very professional, grown-up, adult day.

It was so fun. Dare I say, I actually felt a tad… important.

Not that I don’t when I’m changing diapers and breaking up kid fights. (*wink*)

But that day, I felt like what I said really mattered. What *I* said meant something. Even if it was just describing a recipe that I’d stolen from my mother-in-law. I felt important.

And that’s not normally how I feel around 2-year-olds.

The shoot was looooooong. It took about 6 hours to shoot the 3-minute clip.

And the whole time, I NEEDED TO PUMP.

Finally, after we were done, I went up to a loft where the crew had left their stuff and busted out the ol’ pump. My boobs felt like they were about to bust as well. (Yes, again one more *ouch.*)

At least it was a nice view. 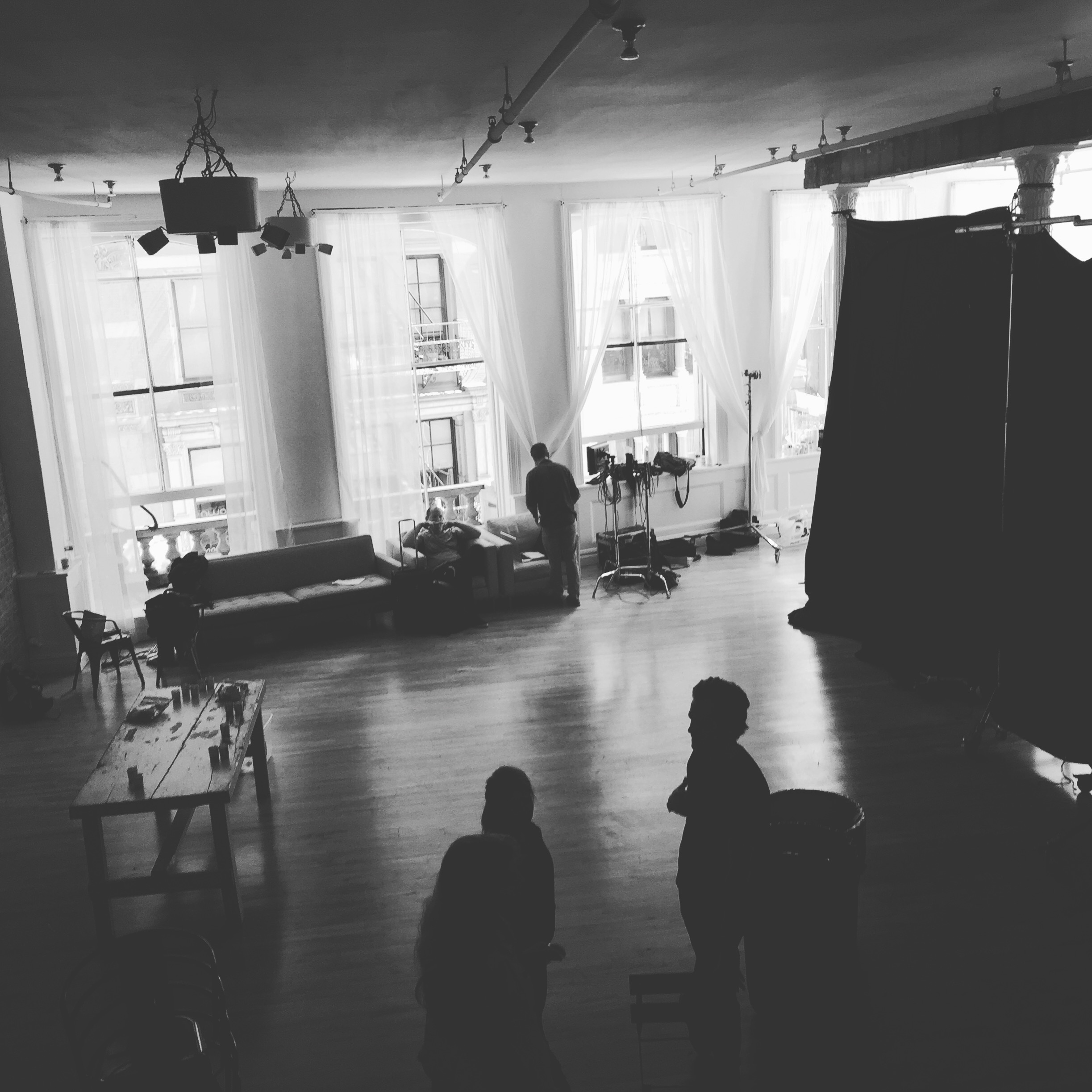 Of course, midway through the pumping session, a 20-something studio guy came up looking for his backpack and came face-to-face with me and the pump, making weird sucking sounds from underneath my laid-out jacket.

“Am I not supposed to be up here?” he asked, awkwardly.

“No, it’s fine. I’m just pumping,” I said with a straight face. Literally, there is no shame in my game. I was like, Yeah I’m owning this.

But yeah, that happened. (Of course it was going to, right?)

After the shoot, we went to Rockefeller Center and, after months of emailing, I finally got to meet my TODAY Parents editor, face-to-face. Then we went somewhere to eat macaroons and drink chardonnay. And then, it was time to leave.

As our cabbie made his way to JFK, I smiled. As we darted through traffic and sped up to the terminal, I knew I was getting back to a place where I’m really more important than anyone else.

Even though no one listens to me.

Even though there are Cheerios and toy messes and a whole lotta spit-up.

Even though I often feel as if I’m talking to no one.

Home is where I am truly the most important person around.

Most days, I don’t feel like I’m very important.

But sometimes, it takes going away to remember exactly how important you really are.