Why I planned my own birthday party (& you should too)

Why I planned my own birthday party (& you should too)

Yes, it happened. Call it whatever you want (egotistical, self-centered, I don’t care). It was awesome. #justdoyou

So, for real. I’m writing a post about why I planned my own birthday, but I’ve never been a big “birthday” person. Truly. I’ve never felt a longing for a big party, lots of gifts and lots of attention centered on me. Don’t get me wrong: I definitely expect the hubby to do something special and personal. But, the bar is low, and (at least I like to think) I’m fairly easy-to-please. One year, he went to Target with the kids, and bought me a few knick-knacks he thought I’d like: a new water bottle, a baby seat for the back of my bike, a scarf. Last year, it was a Publix cake and my favorite sushi dinner at home. I loved it!

That being said, I think we (wives) put a lot of expectation on our birthdays. And, now that I have kids, and I feel that every waking (and non-waking) moment is devoted to other people, I kind of look to the birthday as my BIG DAY when something’s finally about me. The day that SOMETHING AMAZING should happen. The day that I’ll forget about all the 2am wake-ups and outfits covered in spit-up and toddler tantrums over missing Hulk body parts that happened in the last 364 days.

Well this may shock you, but:

For one, I’ve totally screwed everything up by getting knocked up right before my birthday, not once, but twice in the last 3 years. Which means I’m sick and wanting to vomit all day, and I barely want to move. Fail.

Secondly, I haven’t told the hubby exactly what I’ve wanted to do.

I just expect him to know. (Anyone else?)

Here’s the deal with that. It’s stupid.

In the last year, I’ve done some soul searching. And, I’ve learned that if I feel a certain way (hurt, sad, lonely), I NEED TO TELL HIM. He cannot read my mind. Same goes for stuff I want to do. So, now I do something really, really crazy. Are you ready? I just tell him what I want to do. And, here’s my own little wife PSA: No man can read your mind. I used to think, I shouldn’t have to tell him. He should know. Do us both a favor and stop thinking that. It’s a lose-lose. For goodness sake, just tell him.

He wants to make you happy, and sometimes, you just need to tell him how. It’s really that simple.

After talking with the hubby, I sat down at my computer, and legit planned my own party at my favorite little beach bar. Yep, I started by creating a Facebook event called: “It’s My Birthday, and I’m NOT Pregnant!”

And here’s what I wrote in the description:

“Who plans their own birthday party? Isn’t that a little odd?” Why yes, it is. But there’s no shame in my game, and I’m totally owning it. I’m turning 34 years old, and I’m at the point in my life where I know exactly what I want. And that’s a night with YOU (and hubbies), lots of cocktails and zero kids at The Getaway to celebrate my first birthday in recent memory when I’m not pregnant and sick. ABSOLUTELY NO GIFTS. The party boat is leaving from our house at 6pm, or meet us at The Getaway at 7pm. Who’s in?!? #owningit #justdoyou #notpregnant #beerme

I invited some of my close friends. And some not-as-close friends who inspire me or make me laugh. I decided I wanted to start this year being around people I want to be like.

Before posting it, I cleared the idea with my husband, and he was in full support! Like, FULL support. (After all, why wouldn’t he be? It totally takes the pressure off him.) I’d thought about hinting to him what I wanted to do, but just telling him made things so much easier.

In the past, I might have been afraid to voice this, for fear of people thinking that I’m full of myself or egocentric or just plain weird. But this year, I realized something big. My husband and my friends love me for who I am. I don’t need to worry about them thinking badly of me for this.

So I posted the event, and the coolest thing happened. Almost everyone responded, like right away. Almost everyone could come. And they were so excited. There was no pressure. There were no gifts. Just an adult night out, at the beach bar for drinks and tons of laughs. It wasn’t even a party for me, as much as an epic night, where I was surrounded by amazing people who I respect, look up to and am inspired by and blessed to know. I’d like to think it was an uplifting, positive night for all.

(As it turned out, the hubby really loved this idea. So much so that he told me twice the next day. Since I’d told him exactly what I wanted to do, there was zero guesswork, and he was able to focus on the special details that he loves to do, like ordering catering and a cake and reserving tables, etc. It took the pressure off of him, and yet, he still contributed to special details on a night that made me feel so special.)

So, there you have it. I’m sure I’ll get some flack for this post. Some of you may think it’s egotistical or lame or narcissistic. And that’s fine.

But I hope you understand where my heart’s at with this.

If you live your life trying to please others, you will never be happy.

The truth is, we DON’T DO so many things because we’re afraid of what others will think.

Do me a favor. And just own it.

Decide what you want.

And just ask for it.

The people who love you want you to be happy. And when you choose to do the things that make you glow, they’ll only love you that much more.

(But please, if you take a crazy picture at the end of a ridiculously fun night like we did, at least have the decency to blur out everyone’s face.) 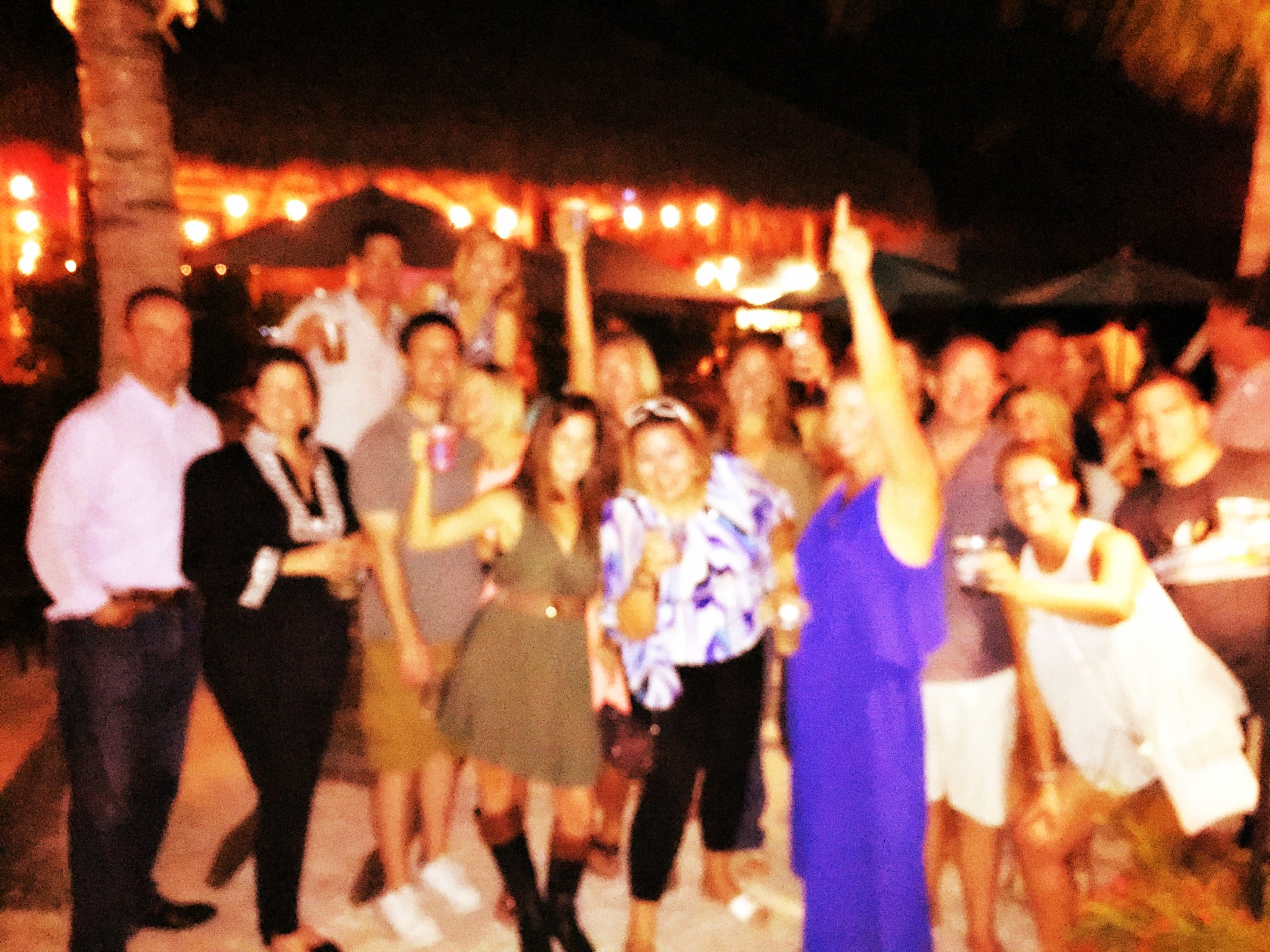 Has anyone else planned their own party? ‘Cause I’m kinda loving it and think it should be a thing.