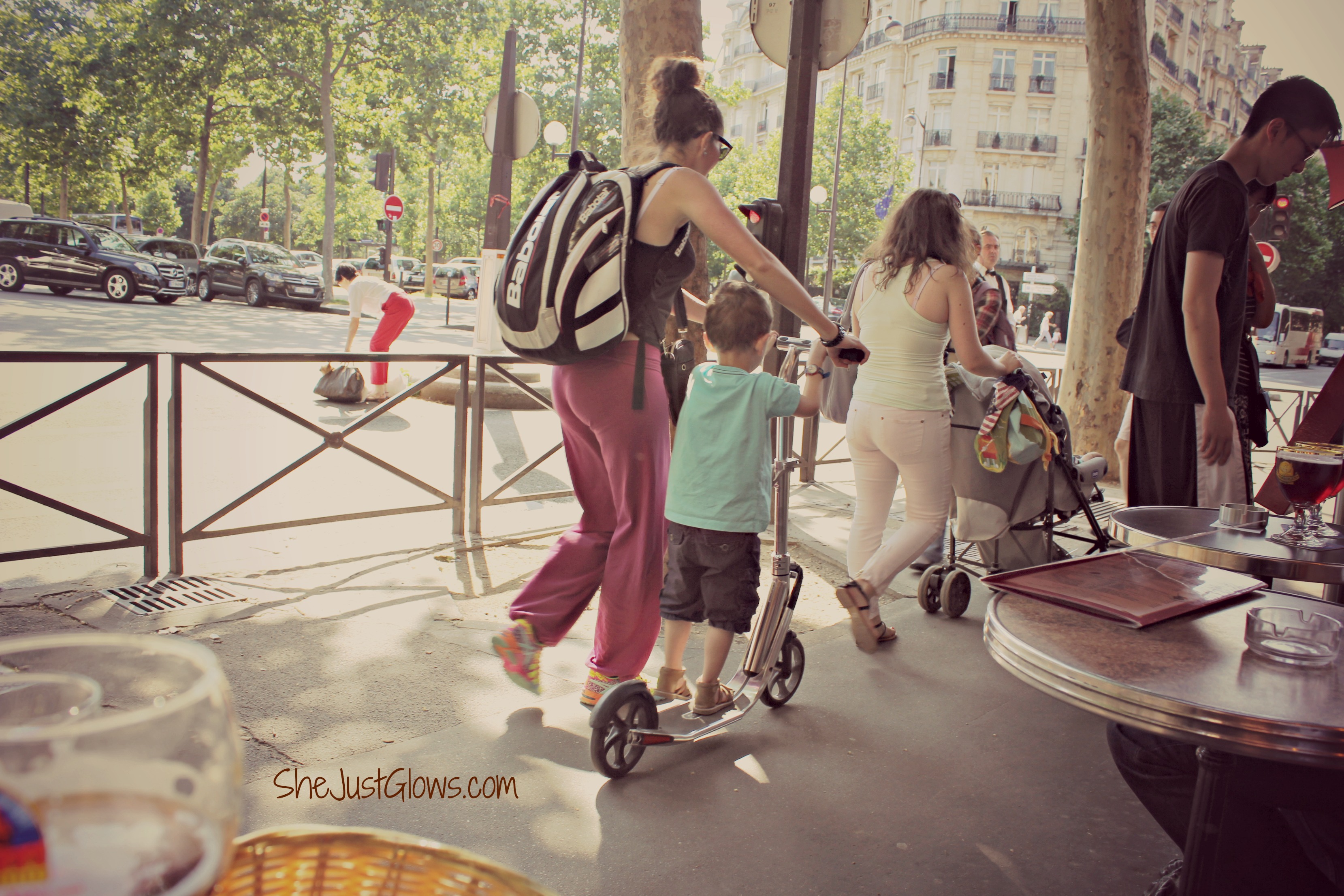 There’s that book: Bringing Up Bébé.

I haven’t read it, so let me be the first to say that I’m no expert, and I’m not pretending to be. But from what I’ve heard, it’s about how letting kids ‘be kids’ and not indulging them and paying attention to them every second (like Americans do) is best for them. Anecdotally, when I’d heard about this book, I thought it was genius. In fact, I’d been eyeing it on one of my good friends’ coffee tables for months and had never gotten the guts to ask to borrow it.

But here’s the thing.

I’ve spent the last week in Paris, and while I don’t want to over-generalize, I do feel that I’ve seen the general formula in which the French raise their kids.

And I’m going to own it. Because being honest is what I do.

Yesterday, my husband and I sat at a sidewalk cafe near the Eiffel Tower and people-watched for about 2 hours. We must have been near a school because, for almost the entire 2 hours, we saw a different Asian or middle-eastern-looking nanny with white French kids march down the sidewalk in front of us, at 5-minute intervals. All of the toddlers were in a different variation of my favorite Maclaren umbrella stroller

Here’s the deal: not one of the kids were with their moms.

Some of them, I will say, were clearly with their grandmas. Which was so adorable. Those lil’ old ladies, swaying from side-to-side, to get their gait just right to walk in time with their 4-year-old granddaughter. It was the most precious thing ever. I just loved it. And let me tell you: these old gals were dressed to the nines. It was 80 degrees, and in true Parisian style, they were wearing floral tops, knee-length skirts, nylons and heels. These women were fabulous all the way.

But where is the Mama?

She’s probably working, and my gosh, it’s no wonder why. Paris is so extremely expensive. It’s a miracle people can survive here. A basic green salad is like €15 (or $20) at a sidewalk cafe. (What the frick?!?) Seriously, who can afford that? My husband and I are honestly stumped on how families survive here. It’s truly unbelievable. And I salute them. And a working mama is doing the best she can for her family, and if she enjoys working and supporting her fam, even better. You go girl.

But again, I have to ask.

Based on what I’ve seen: is the French way of raising kids really so much better?

It’s not a competition, or a confrontational thing, but really, let’s be real.

And ask the question.

Why is the French way so much better?

This morning, my husband had some work to do. So, I tried to look as non-pajama-ish as I could, and scurried down to the basement of our hotel to scrounge up some baguettes, Brie, scrambled eggs and black coffee at the breakfast bar. As most European buildings are, this hotel is beautiful but the quarters are tight. The “breakfast room” is basically the dungeon of the hotel, painted white so as to not seem claustrophobic. Or underground. (Which it tooootally is.)

As I walked back to my table after getting my second cup of coffee, I couldn’t help but smile, grin, chuckle — and I actually had to stop myself from giggling with glee — at the site of this angelic, chubby, blonde baby boy who’d just been pulled up in his stroller, at the table next to me. Uggggh, I could just eat him up! He was sweet and cute and jovial and his eyes just smiled in a way that made me want to pick him up, bounce him on my knee and play with his sweet face for hours. (Since you know how much I miss our 2 kids under 3, this shouldn’t surprise you.) I legit wanted to kidnap this sweet French baby.

Sitting next to him at the table were his grandparents, and his 3-year-old sweet-looking, quiet, white-blonde big sister. A few minutes later, their Mama walked in. She was frowning. She was probably tired. Listen, I toooootally get it. This is not the judgy-wudgy mom police. I am the fuuuurthest person from being able, or wanting to, judge another Mama who’s having a not-so-great day. Not. My. Thing.

But, as I kept writing 8 Reasons Parisians are skinnier than Americans on my laptop, I was toootally eyeing this French family right next to me.

The frowny mom fed the baby some yogurt.

And then totally ignored him.

The 3-year-old was sitting at the table, right across from her Mama, and there was no conversation.

So it was basically silent, except for the baby’s sweet coos and pleads to play from his stroller.

Again, this is not about me passing judgement on another mom. We all have our days. Truly. I am not here to say: Oh, she is such a failure, and I would never do that.

But I do want to say: Why not talk to your 3-year-old? And how about that sweet baby watching you eat your fruit salad from the designer stroller parked right next to you? Your parents are at the table right behind you, waiting to help. Stop it, frowny French Mama. Your kids deserve better than that. And more importantly, so do you.

And maybe that’s the French way of doing things. Make the kids feel as insignificant as possible so they just shut up. Maybe I’m ignorant, but after 5 days in Paris, this is what I’ve observed.

Later that night at dinner, we were drinking Merlot at the trendy sidewalk cafe near Notre Dame that we’d tried the last 3 nights to get into. Finally tonight, we were successful. So here we were, seated on our amazing-trendy-restaurant thrones when we saw a French family walk up.

The mom was basically me, in a French form. Normal-looking, trying to dress cute, hold the hand of her sweet little 3-year-old boy and get a table at the same time. The adorable boy was wearing a navy blazer atop shorts and a striped t-shirt (soooo very French) and lace-up loafers. (Like, the loafers were soooo cute I wish I had a pair in my size. Uggg, I need a pair of those!) The angelic sweet little dark-haired boy was holding an airplane.

I kicked my husband under the table and said: “Look!” Without another word, he knew exactly what I meant.

Because that little boy was exactly the French version of our firstborn son, Sully. Fearless, rambunctious and innocently-curious. And, just like our son, obsessed with airplanes. This sweet boy had a blue metal airplane in his hand, and was ramming it through the air, as his mom led him to the back of the restaurant to find the server who would tell her that there were no tables available.

I watched with glee as the sweet airplane boy, totally engrossed in his play, was led back out of the restaurant. Then, his mom guided him back out to the picturesque Parisian street corner, surrounded by 4-story, historic buildings and full-grown maple trees, to join their group of adult friends.

And I tell you, it saddened me.

That little boy looked up. Looked into the eye of every single adult in that circle.

He was just trying to show someone what his amazing blue metal airplane could do. It could go up, it could go down, he made special sound effects with his mouth. It was an amazing plane. There was no telling what move it would do next.

But no one looked down.

They completely ignored him.

He continued playing to himself, totally oblivious.

But, back at my trendy table, I was sooooo sad for that poor little boy.

But you know what?

Kids are sooooo much more than that.

Kids are your legacy. They are important. They are valuable. They are your mark on this earth.

And God help me, when I get home to America, when my kid is making his crazy saliva-flying sound effects with his toy Dusty from the Planes movie, SO BE IT.

Far be it from me, to hold his hand, walk him out of the restaurant and completely ignore his play.

Because his play is the most imaginative, creative and genius thing I will see in my sad little boring world all day long.

I want to be down there, graying-up the knees of my fabulous dryclean-only pants, so I can hear his crazy nasty slobbery sounds and hearing why he cares so much that Dusty is flying through Beaurepaire on the Rue de la Bucherie in the Latin Quarter of Paris.

‘Cause here’s the deal.

I’m not that important that I can’t play with my kid.

And doing so doesn’t make him self-important, or precocious.

It makes him a kid. Whose moms cares. More than anything in this world. About what he wants to play with, and why.

(This post may contain affiliate links, which means, at no additional cost to you, I make a few pennies if you make a purchase. Every penny keeps my site a runnin’, so thank you!)