Ahhhhh, the first birthday party. It’s so much fun. But boy oh boy, the pressure to make it the perfect party. Of the century. With our first son, I went all out with an elaborate authentic pirate-themed birthday party at the beach. I was basically an evil taskmaster and, as a result, threw a gorgeous party but had a miserable time. (I was also 9 weeks pregnant, but I digress.)

Ever since, that experience, I resolved that I would never again focus on the party over the kid. 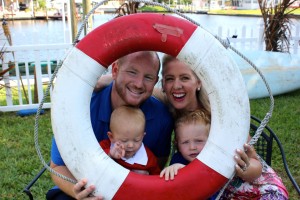 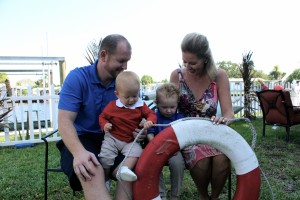 And thus we have the Gilligan’s Island theme birthday party. Fun, easy, inexpensive and focused on our beautiful little boy who is now 1! Everyone had fun with the theme, and my mother-in-law even dressed up as Mrs. Thurston Howell, III! As you can see, Gilligan loved it! 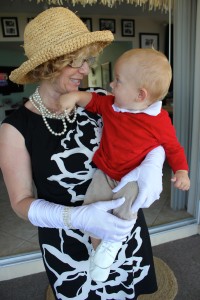 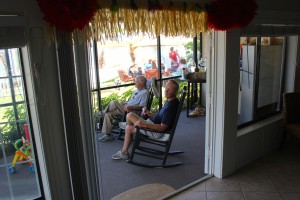 As with the boarding pass I designed for Sully’s Little Aviators party, I really wanted this invitation to be authentic and yet funny and casual. I got a red long-sleeved t-shirt (and white polo shirt to go under it) to dress up my little Gilligan, and I took him to a local nature preserve to take some pictures. I designed my own invites at Vista Print. I love their feature where you can upload a photo and custom design all the text yourself. (Vista Print is not paying me to say that.) It made it easy to put text on Porter’s red shirt. 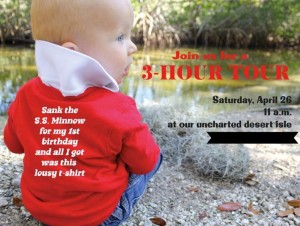 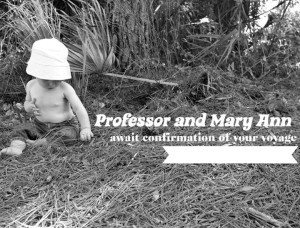 Our decor was pretty easy because we got a TON of help from our awesome next-door neighbors. They love fishing and collecting, so we had all the aged buoys, life preservers and nets we wanted. They even let us borrow their vintage canoe to use as a prop in the backyard. The only thing I bought was an $16 life ring from Amazon. I used a permanent marker to write “S.S. Minnow” on the front of it, and then hung it on our door! I also added a beach mat as a fun doormat to mark our guests’ entrance to our 3-hour tour. 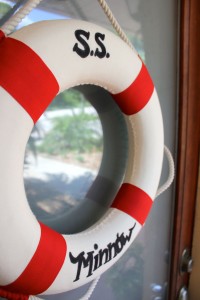 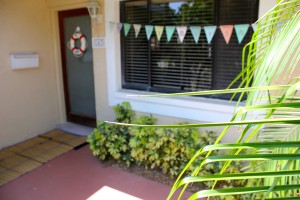 I kept the centerpieces really simple: rope and burlap I had leftover from Sully’s pirate birthday party, and some fruit. I love decorating with food because it can be used after the party, instead of buying decor that will just be put in a box in the garage and probably never used again. I bought a ton of extra coconuts, pineapples and mini bananas at the produce stand and set them up on the food table as well. What we can’t eat right away will be perfect frozen and cut up for smoothies! 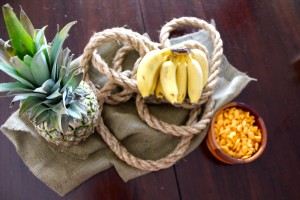 For the food, I did fish sticks, coconut shrimp, fruit skewers, pineapple-coconut jasmine rice, store-bought mac & cheese. I loved my food choices for two reasons: they were inexpensive and easy. The fish sticks, coconut shrimp and mac & cheese were frozen, so all I had to do was throw them in the oven a couple hours before the party, and they were done and out before guests arrived. My mother-in-law cut up the fruit and skewered it that morning. (And it also made awesome leftovers for smoothies!) The only thing that was homemade was my pineapple-coconut jasmine rice, which I had cooked two days earlier, put in a Ziploc and refrigerated, then put it in the Crockpot three hours before the party to let it warm up. Easy! It was sooooo nice to have the food all done and out on the tables before guests arrived, so I could actually focus on having fun and spending time with our little birthday boy! 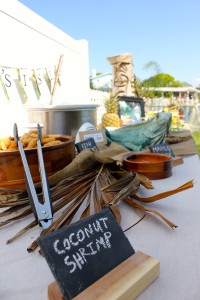 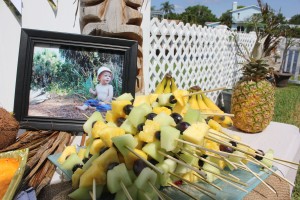 I also put mango salsa from Sam’s Club and tortilla chips, along with Goldfish, out on the tables so people had something to snack on. I added some framed pictures of our little Gilligan in the bathroom and on the food and snack tables as well. (And I’m going to recycle the photos to give to our moms as Mother’s Day gifts. Score!) 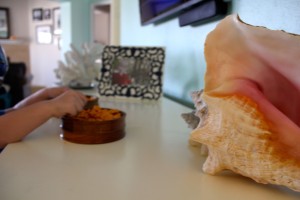 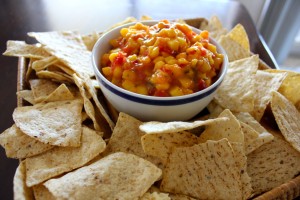 I always love making sure to have new bathroom soaps that go with the theme too. So I bought a couple of Bath & Body Works’ new Hawaii soaps and put one in the bathroom and one in the kitchen. (Which is perfect because, on the show, the S.S. Minnow’s 3-hour tour actually left from Honolulu. Just some Gilligan’s Island trivia for ya!)

Favors were white Gilligan hats from Oriental Trading and Hawaiian leis I got from Party City. 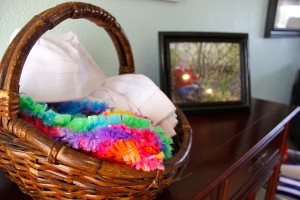 I looooooved setting up the drink table. We made piña coladas for the adults and had Capri Suns for the kids. In addition, I filled my two large drink carafes with ice water (with floating pineapple chunks) and mango-pineapple Crystal Light. Serving drinks in bulk is waaaaaay cheaper than purchasing bottled water and single-serve teas or sodas. We served them in inexpensive red Solo cups, with striped straws (that I had gotten as a gift) and cocktail umbrellas from Party City. (‘Cause why have a cocktail if it doesn’t have an umbrella?!?) 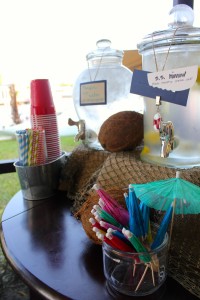 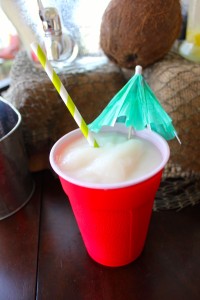 Everyone raved about the desserts, which made me feel amaaaaazing because I am not a baker. I made homemade vanilla ice cream, Myers Rum cake (using this recipe), and a triple batch of no-bake Coconut Cream Pie. (In the show, MaryAnn made coconut cream pie several times.) Listen, I’m 32, and the rum cake was the first-ever successful cake I have ever baked in my life. A momentous occasion indeed. I will definitely be making it again. It was soooooo good! (And easy.) Gilligan seemed to love his own little coconut cream pie! 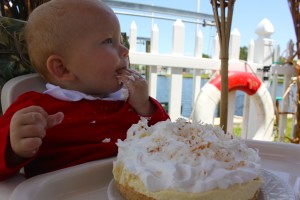 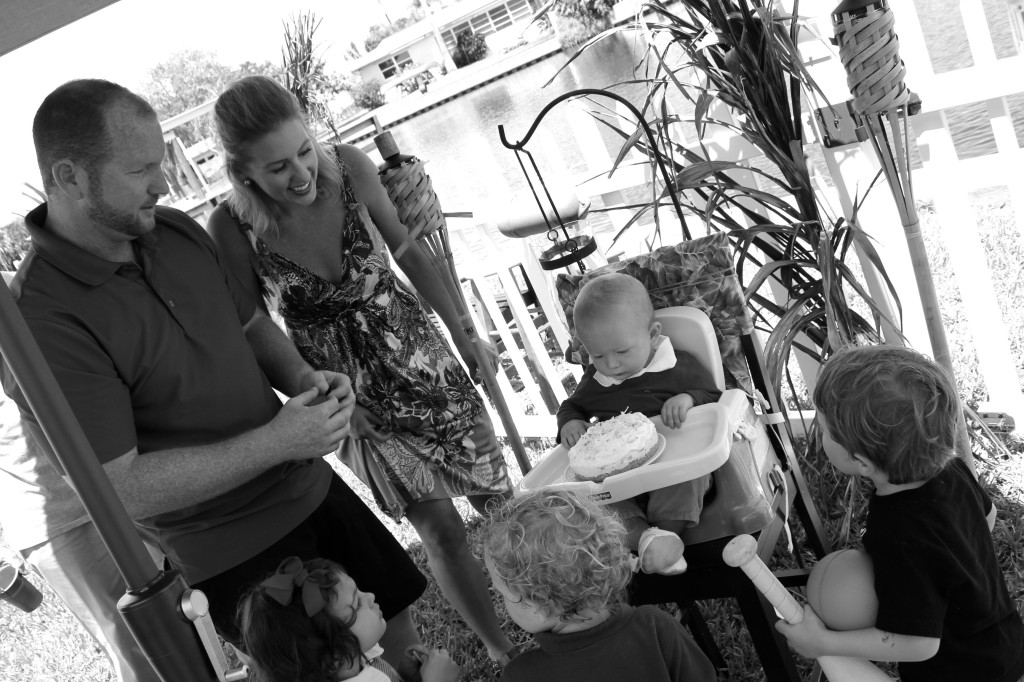