How I scared the pizza man

How I scared the pizza man

This article was also published in The Huffington Post. 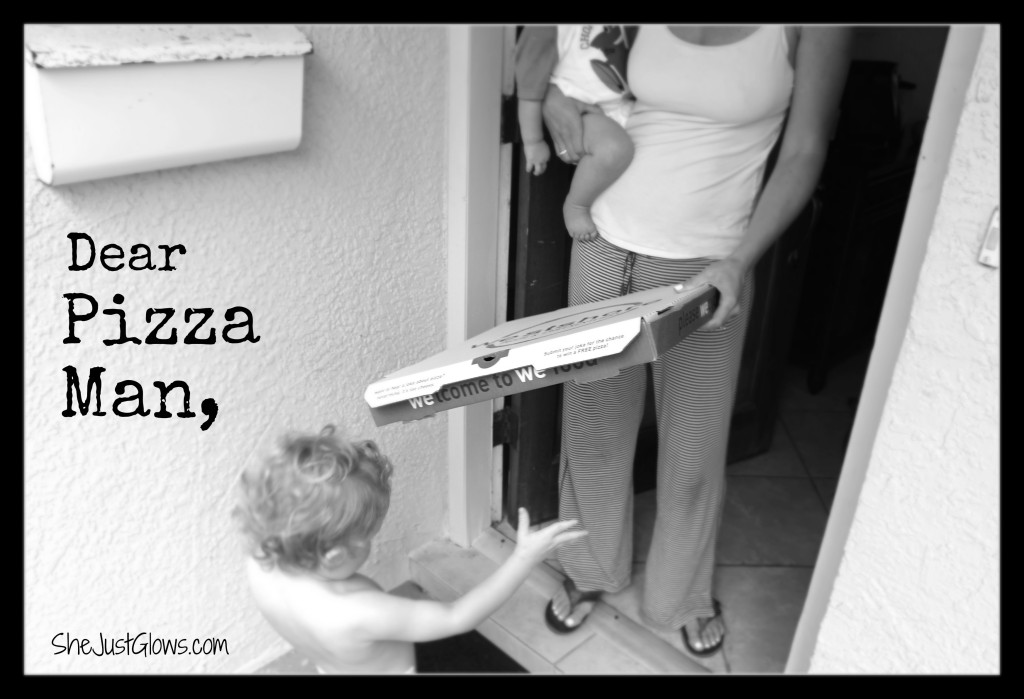 I want you to know that I normally don’t order pizza.

Unless it’s the 5th night my husband has been away on business, and I’ve been alone with 2 boys under 3. And, unless the kids haven’t taken naps all day. And, unless I have laundry stacked to the ceiling, and a sink full of dirty dishes, but not the time nor the mental capacity to care. All of which were the case tonight.

I want you to know that the 2-year-old who opened the door for you, wearing just a diaper, isn’t allowed to open the door for strangers. But you and the mail man were the only people to come to our house today. And, you see, he’s in just a diaper because I can barely keep up with keeping that clean and changed. Much less dress him. If I put him in clothes, he’ll think we’re going somewhere. But we’re not because it’s raining. And we don’t have grandparents in town to crash, and all our friends’ daddies are coming home from work right now.

I want you to know that the baby I was holding was wearing a Valentine’s Day onesie because I haven’t had time to get the correct-sized clothes down from the boxes in the garage. And because it just fits him so nice. Even though it’s almost May. The snot and crusty food on his face is because I haven’t had a chance to wipe it since lunch. Oh, and the red mark on his forehead. Yeah, we should address that too. That’s from his brother. Like I said, it’s been a long week.

I want you to know that the Real Housewives you heard on the TV in the background was only because I’d heard a constant stream of Barney, Spiderman and Transformers all day long. And by 4pm, I just needed to do something for me. So I turned on some trash TV and let my mind melt away as the kids crawled all over each other and fought over their Easter basket spoils.

You should also know that our dogs don’t normally storm out the front door like that, but they know the man of the house isn’t home. And they sensed my stress. They’re also bored and probably had to pee really bad. I’m pretty sure I hadn’t let them out in like 7 hours. Come to think of it, I’m not even sure I fed them this morning.

And then there’s me.

I want you to know that I don’t normally wear pajama pants at 5pm. But today, I was tired. And rundown. And defeated. So I popped open a bottle of wine at 3pm and just said “to hell with it.” But just so you know, I normally don’t do that. I can actually look pretty put together, if I try. But tonight, the charade was over.

As soon as I opened the door, I saw the empathy in your eyes.

“Wow you’ve got your hands full” was all you could say.

And I just wanted to say this.

As you scanned my pajama pants, the Valentine’s Day baby and the almost-naked toddler, with the dogs snarling at your feet, your eyes welled up with compassion as you looked me right in the eye.

There was no judgment, no disgust, no irritation.

And with that, I scraped just a little tiny bit of my dignity back up off my dirty, milk-spattered floors, signed you a handsome tip and wished you a Happy Easter.

Thank you. For making me feel just a tiny bit like a badass, even if just for a few seconds.

Oh, and thanks for the pizza. It went really well with my wine.