Ooooooh Halloween, I’ve been waiting for you ALL YEAR LONG.

Not because I love the holiday. But because I saw this adorable picture of a baby in a lobster pot when I was pregnant, and I have been obsessing about recreating it ever since! 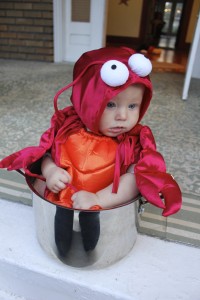 This year, we were Surf & Turf. The baby is the surf in a borrowed baby lobster costume. The toddler is the turf.

I found that toddler steak costumes were hard to come by (A.K.A. non-existent) so I ended up making it. I used two old dark brown bath towels (that I sewed together with a gap for his head to get through), some off-white felt (for the T-bone) and black gross-grain ribbon criss-crossed along his front (for the “grill marks”). 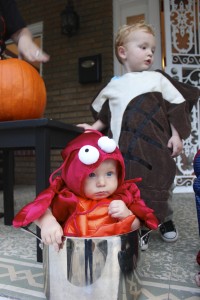 Hubby and I were the chefs. I made our hats out of the white lining from an old pair of Pier One curtains. (Yes, I’m THAT cheap.) 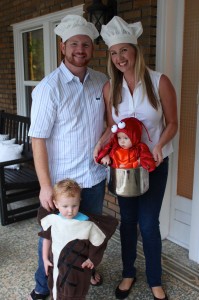 Happy Halloween! (Now, what shall we dress up as next year?!?)

What are your favorite family-themed Halloween costume ideas? Tell me in the comments section below!

We have a great marriage, but this season has been