I can’t believe my little baby is one year old already! Since we live in Florida, and Sully’s birthday is in September (translation: terribly hot and humid), we decided to have his party out at the beach. We wanted a shipwrecked theme to invite all our little ‘pirate’ friends to, and I lucked out because there is a Treasure Island Beach in our area! I KNOW… awesome, right?

I started with the invites. I wanted something that was understated but still kept with the pirate theme, so I threw a borrowed pirate hat on the kid, threw him on the sand and took a few pictures. Lucky for us, we beat the Florida late-afternoon thunderstorm that was headed our way but benefitted from some great light. I love using Vista Prints for ordering invites because you can make your photo the backdrop and then make the text completely custom. And they’re usually the cheapest as well. (Vista Prints does NOT pay me to say that!) 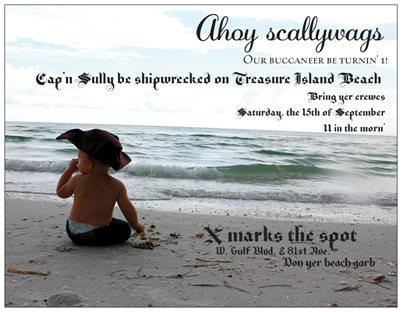 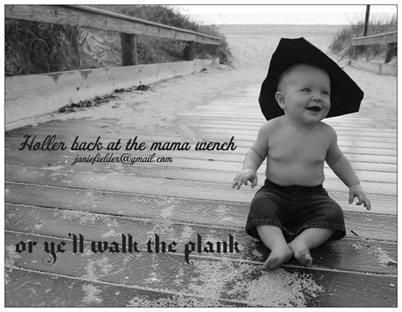 As far as the theme went, it was my goal to stay away from cheesy, brightly-colored kid cartoon-y pirates (no offense, Jake). Instead, I focused on a primitive, authentic pirate feel for the party. I bought some thick brown “ship” rope at Home Depot (did you know you could buy it by the yard there?) and strung it in between shepherd’s hooks. My best friend made the awesome banner with her Cricut! 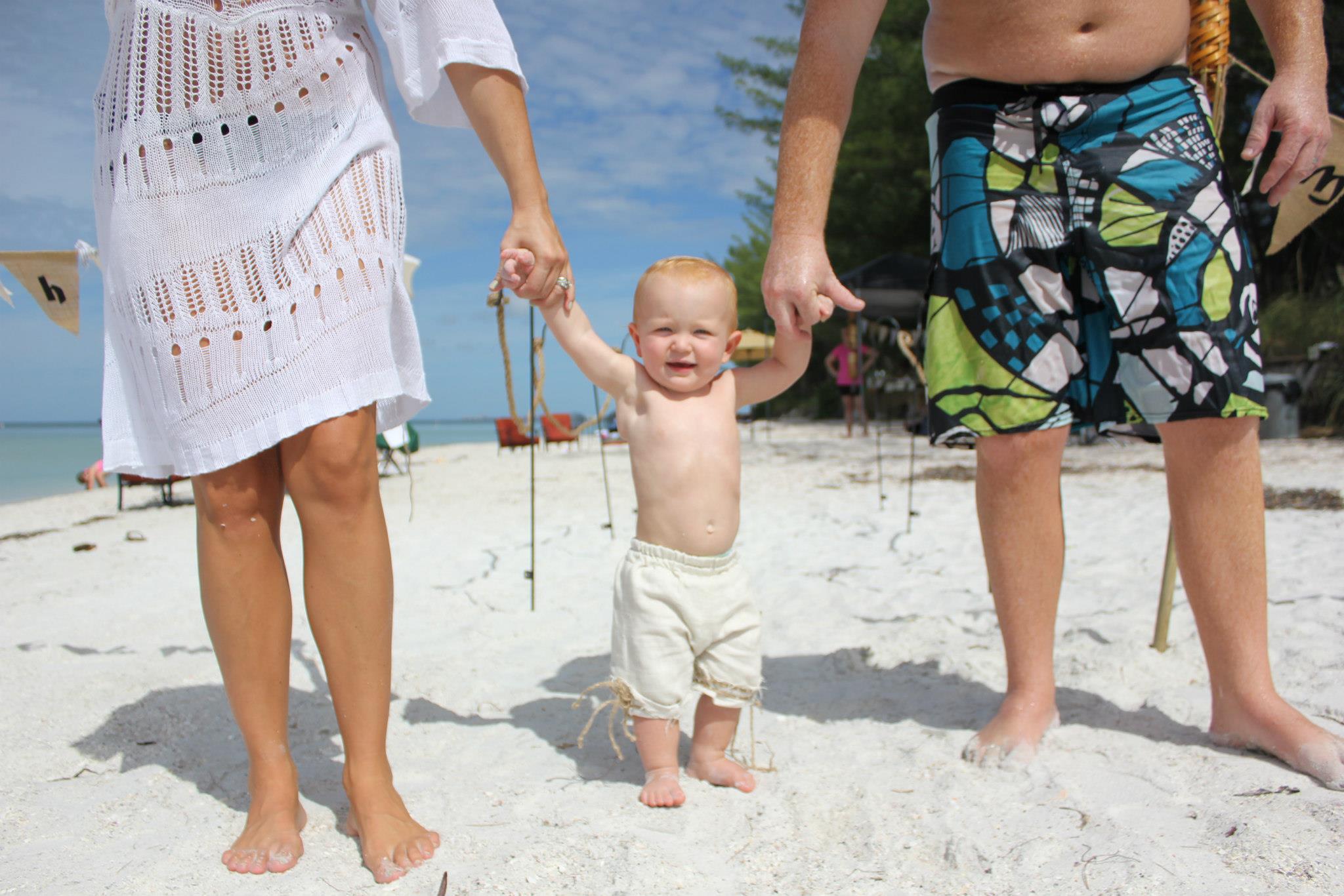 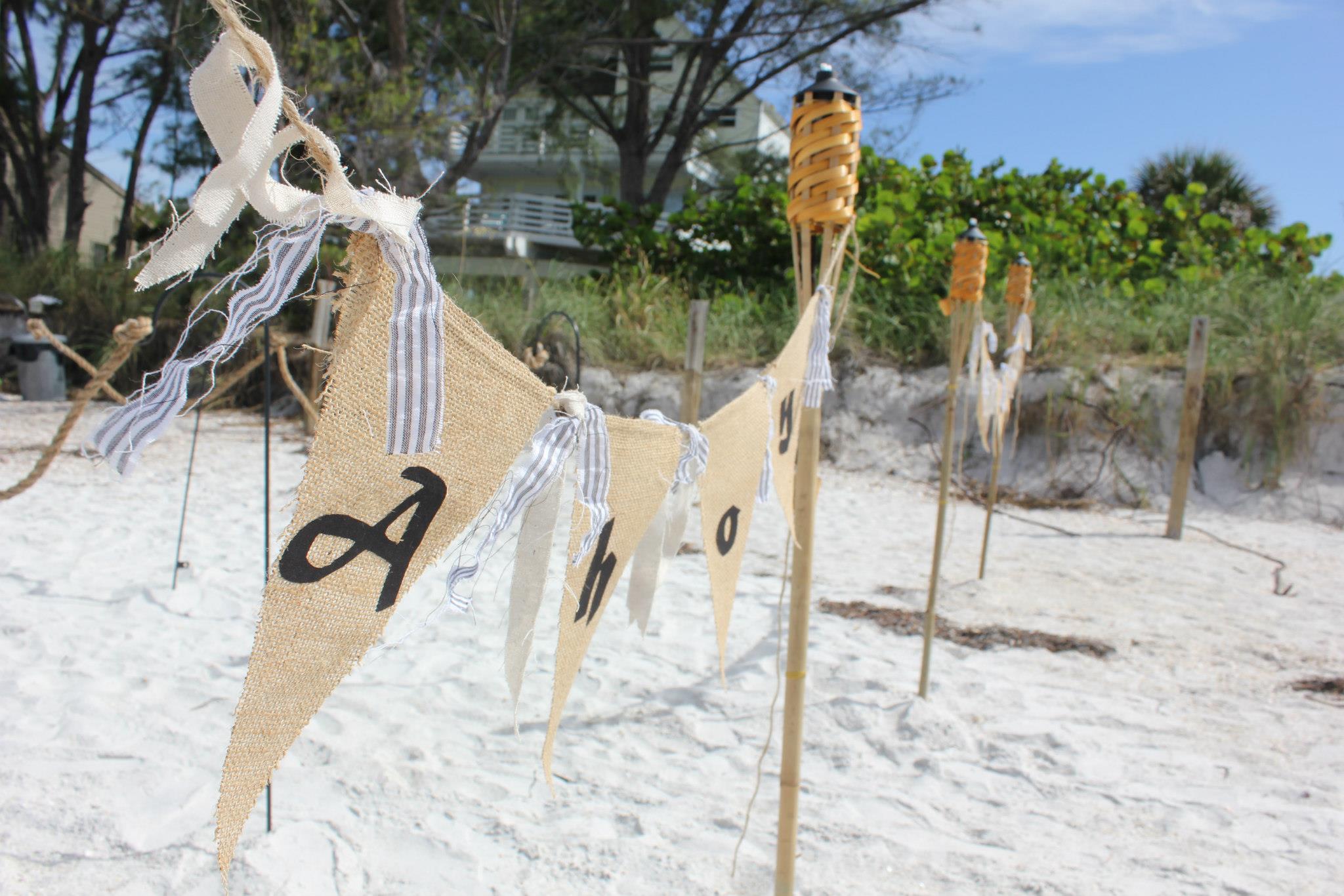 My little pirate wore some easy linen shorts I made (using this awesome free tutorial) and had professionally embroidered. 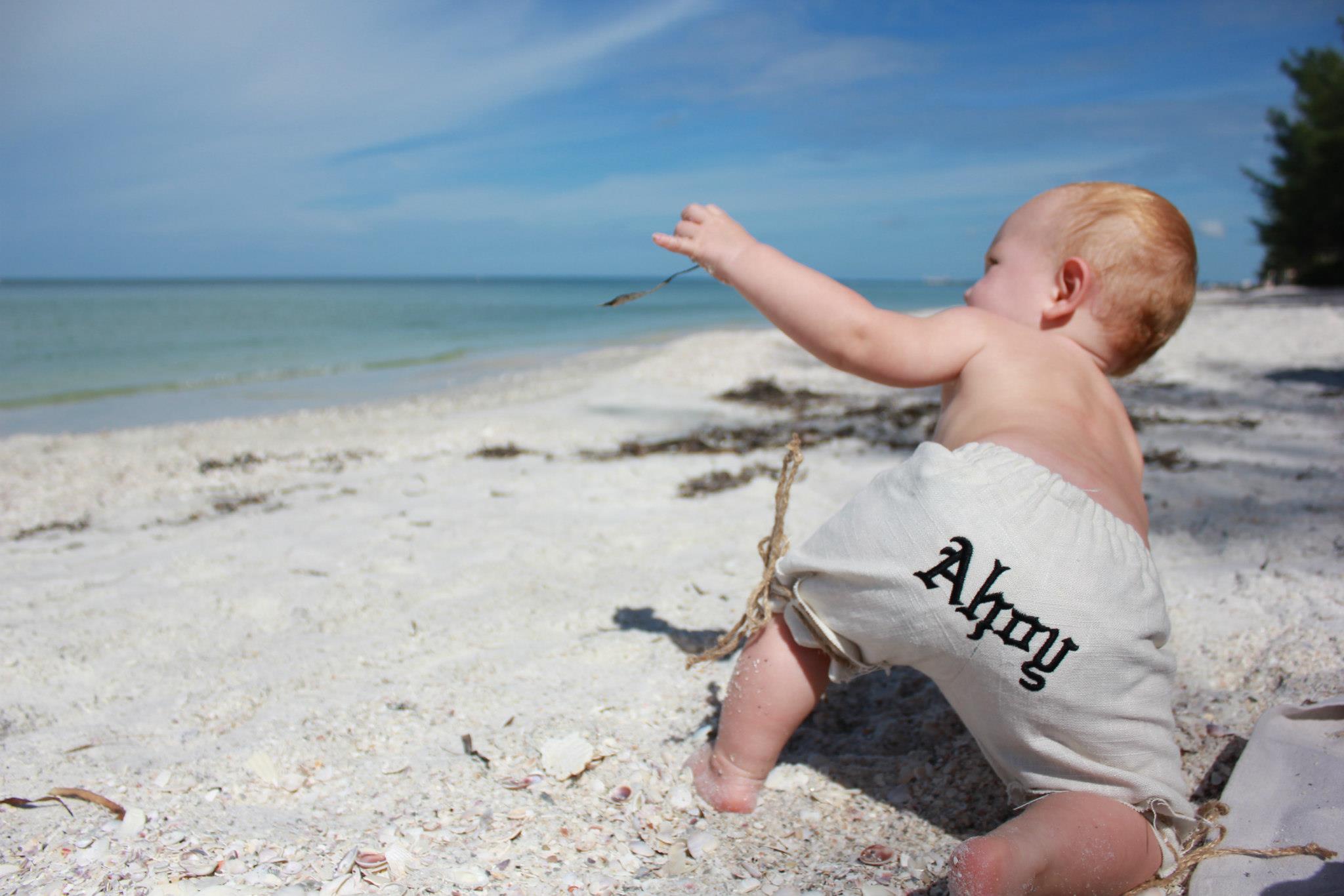 I also scored some great painter’s cloths (the canvas sheets painters put down to protect flooring) at Home Depot. They were only $12 each and were a wonderful, neutral alternative to sitting on the sand. And yes, we brought our outdoor patio furniture to the beach. Yes, my husband and family were amazing. We will not be doing that again. I promise, Honey.

For food, I tried to stick with the pirate theme. Our main dish was shredded chicken and pork. 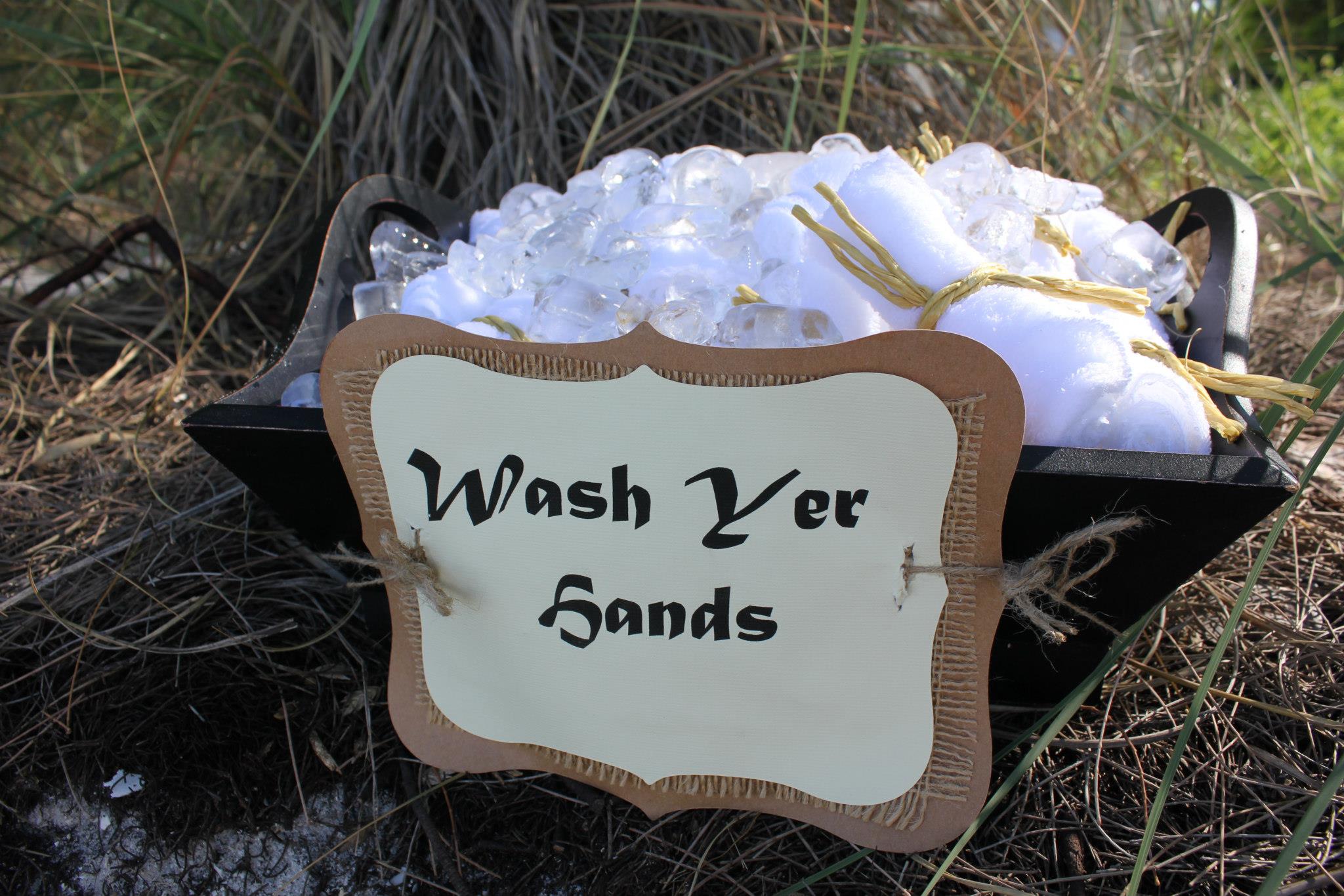 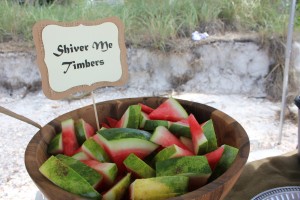 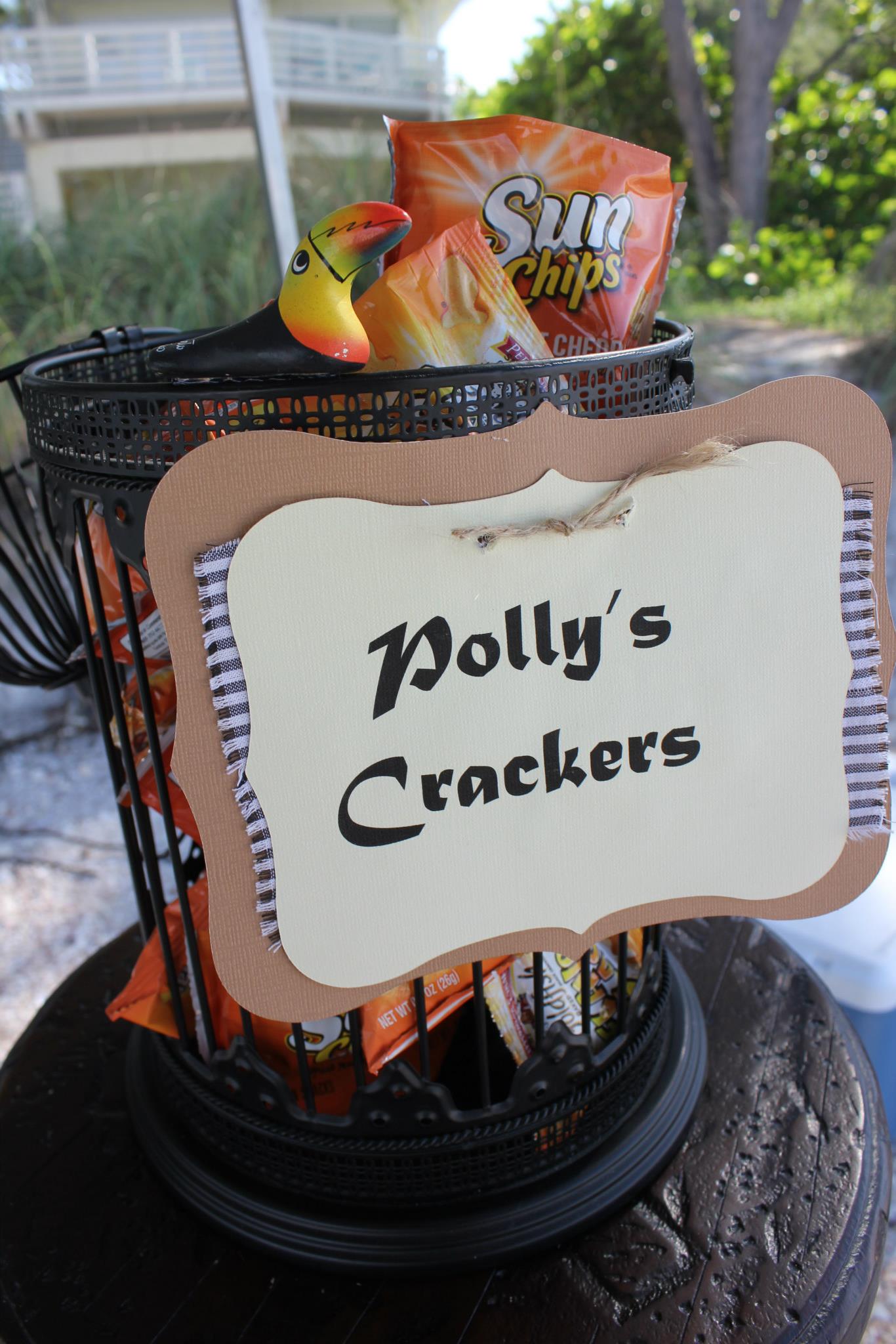 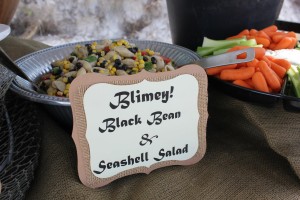 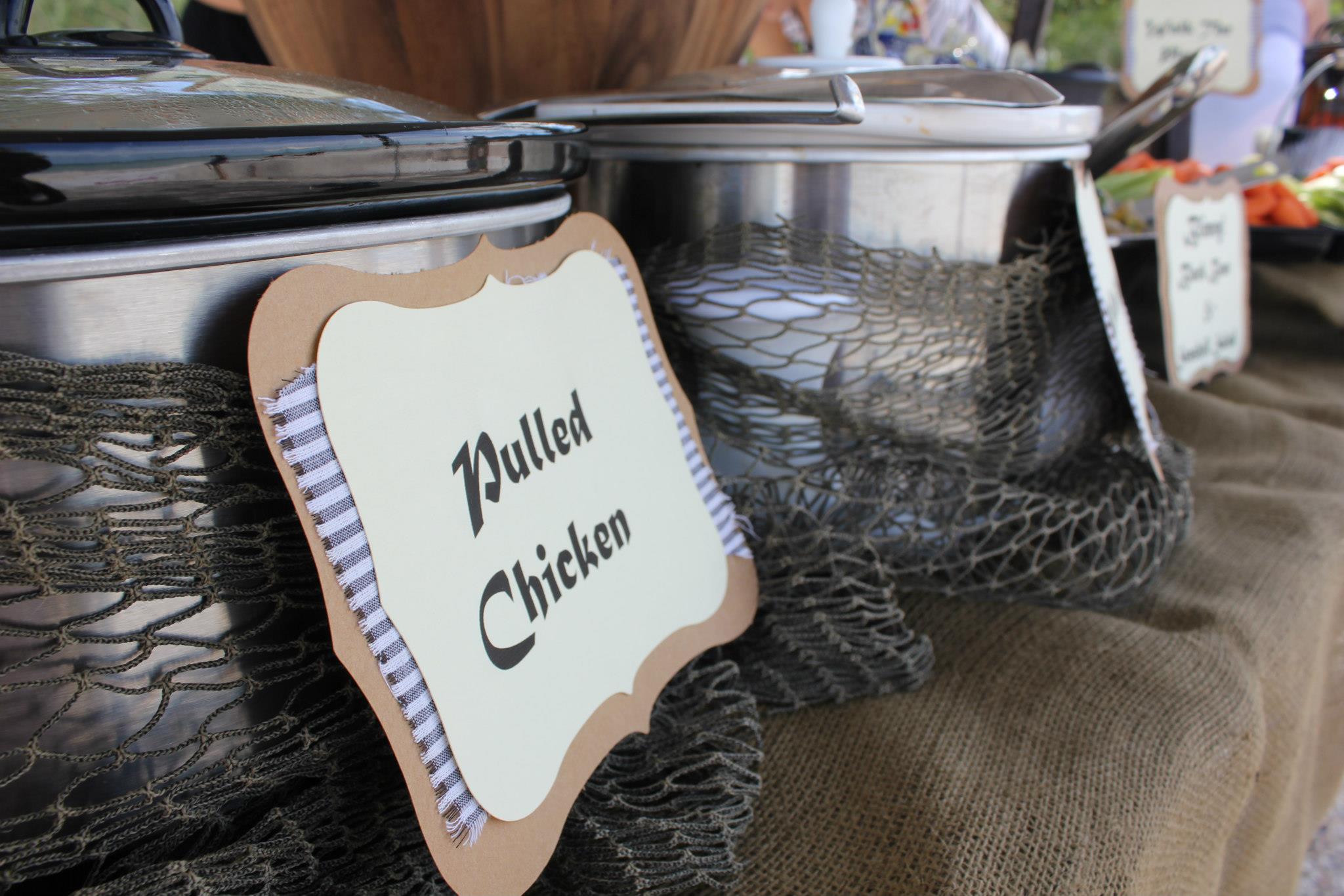 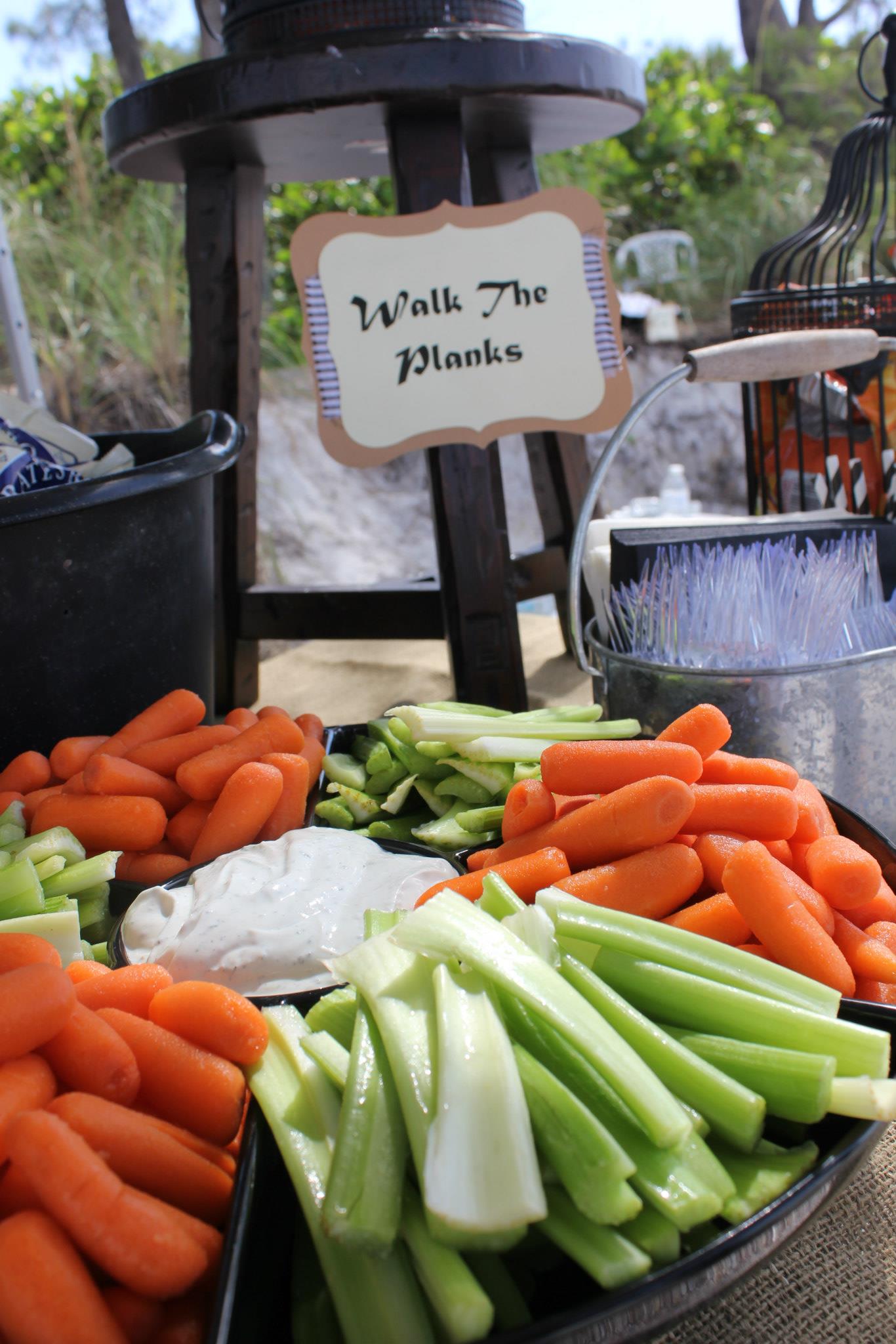 And what one-year-old’s party doesn’t have custom water bottle labels? (Like I said earlier, I went “overboard.” Get it? Seriously though, I vow to plan SUPER low-key parties from here on out.) 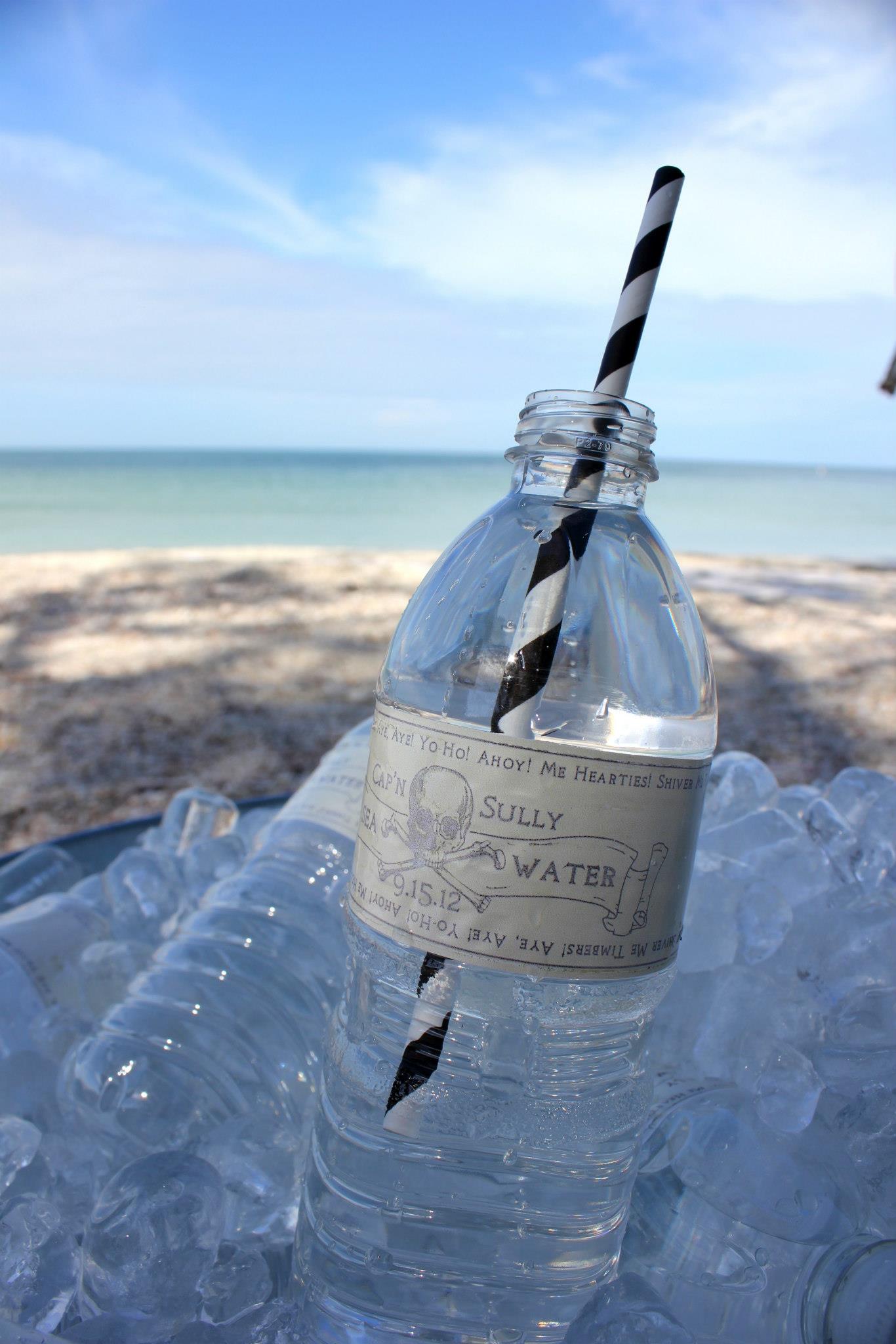 I wanted some party favors that were different, and not junky and something the parents would throw away. So I went to our local shell shop and got some of the most adorable mini starfish. Aren’t they cute! I borrowed a friend’s treasure chest and buried it in the sand. It ended up being a “game” for the older kids. “X” marked the spot and they dug up their special favors! 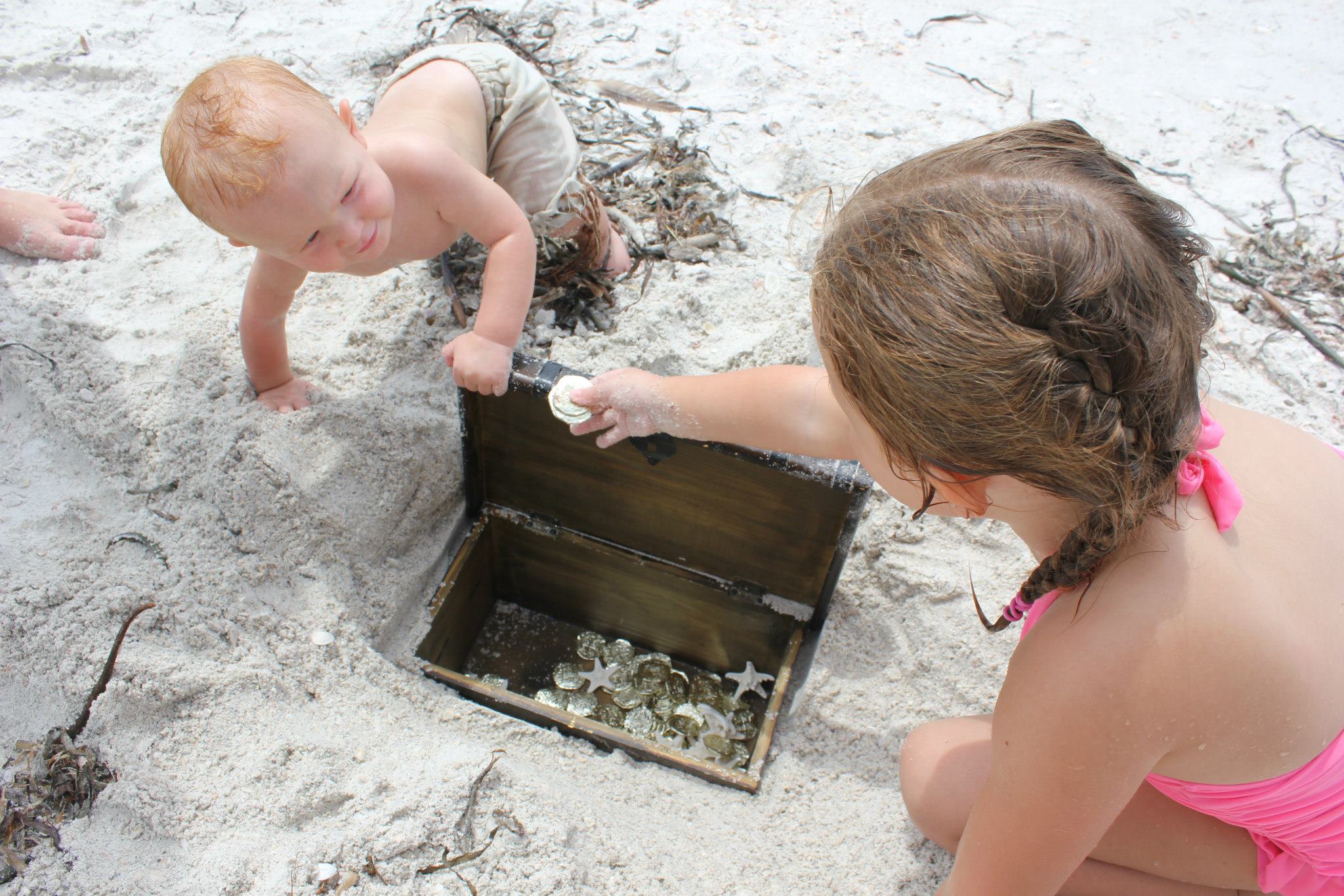 I ordered cupcakes from Walmart for our guests and made a mini Key Lime pie for Sully’s smash cake, using my favorite insanely-easy Key Lime pie recipe. I used brown sugar for the table display, and marked the table with a black “X” home decor accent we had at home. 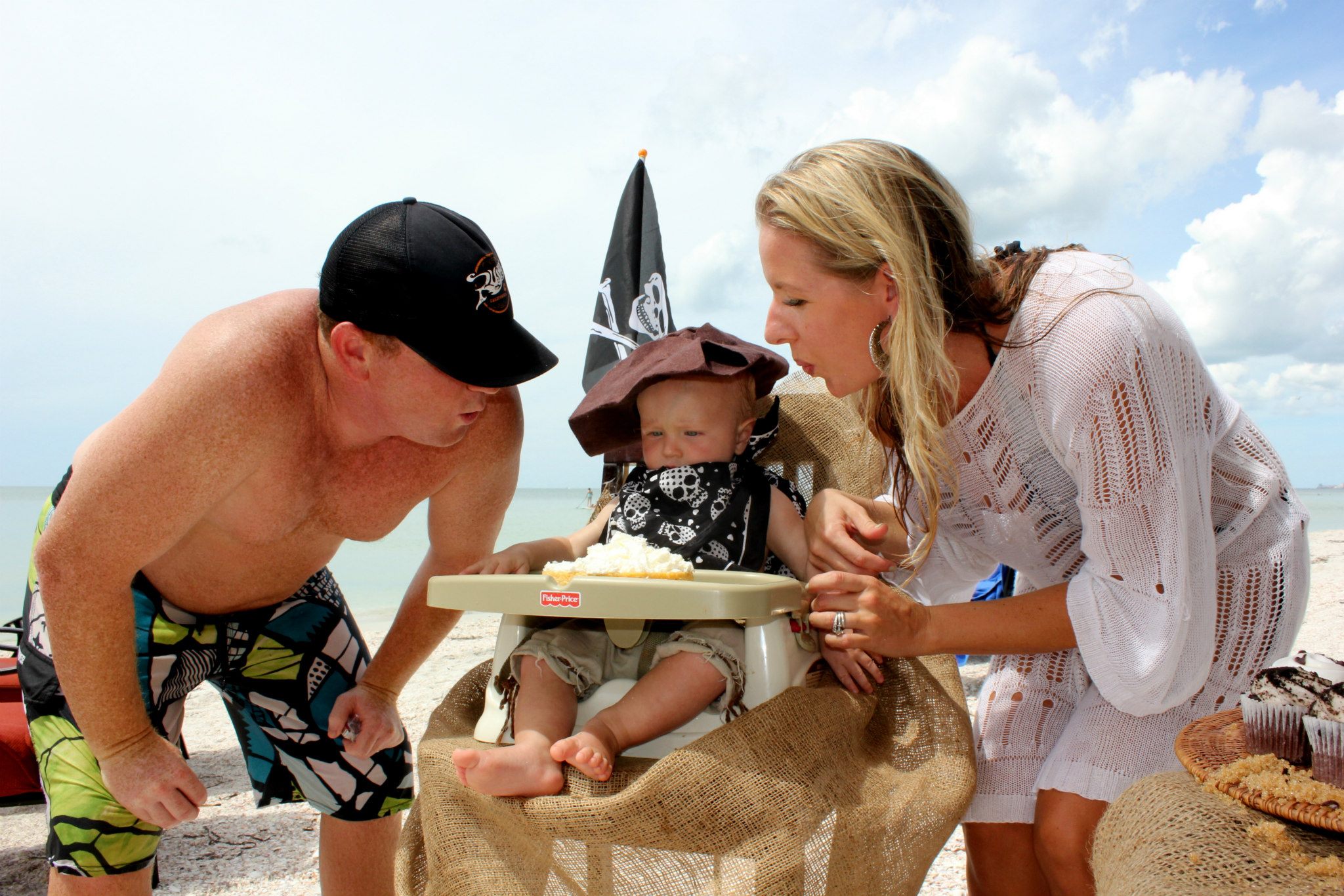